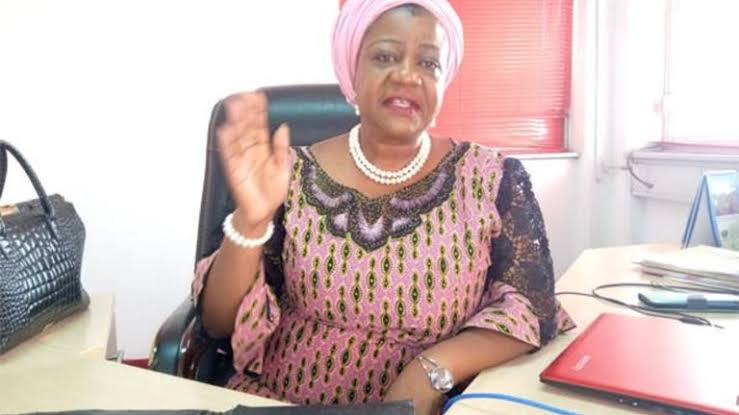 This followed her being grilled intensely by Senators to determine her suitability for appointment as a National Commissioner of the Independent National Electoral Commission (INEC).

Onochie, who appeared before the Senate Committee on INEC, said she parted ways with the APC and stopped her volunteer work with the Buhari Support Organization (BSO) since 2019.

Onochie, whose nomination has continued to generate uproar, said people and groups are only after her because of her ‘due process stance’ and belief in the rule of law.

In her opening remarks, the presidential aide said she was aware of series of petitions against her membership of the APC and the fact that someone from her state was already on the board of the INEC

She however admitted being part of the Buhari campaign organisation in 2015 before her appointment as Special Assistant on Social Media.

She also admitted having sworn to an affidavit at a Federal Capital Territory (FCT) High Court, Abuja that she was a member of the APC.

She claimed she stopped being a member of the party immediately after the 2019 elections.

Onochie said: “I have learned over the years to stand with the constitution and due process but not on partisanship or sentiments.

“Since 2019, I have not had anything to do with any political organisation, including Buhari support groups.

“When APC was doing re-validation of party members, I did not take part in that exercise.

“As I’m sitting down here, I’m not a member of any political party in this country. I’ve no partisanship in my blood.”

On petitions urging the Senate not to clear her for the job, Onochie said: “I have seen many petitions against my nomination not only from the PDP, but also from some APC members.

“I’m not partisan. They know. It is about the law. No one has any reason to fear for my nomination as INEC commissioner representing Delta.

“As far as I’m concerned, I’m madam due process. That’s why all the attacks. I follow due process, I follow the law.”

However, an affidavit she swore to at an FCT High Court, dated 30th June, 2021 and attached to one of the petitions against her, contradicted her claims.

She deposed to the affidavit at the High Court of the FCT in a case involving her as Plaintiff and Emeka Ugwuonye (Defendant).

Paragraph three of Onochie’s witness statement on oath, reads, “That | am also engaged in active politics and a member of Neighbourhood Watch and has elso contested the Local Government Elections under the Conservative Party in the United Kingdom.

“| am also a member of the All Progressives Congress and a volunteer at the Buhari Support Organisation.”

Onochie further told the Committee that Mrs May Agbamuche, a serving INEC National Commissioner from Delta State, is actually representing Cross River on the board of the electoral umpire.

Onochie, three times denied her membership of the ruling APC and told the Committee that she stopped being a card carrying member of APC in 2019 as soon as Buhari was re-elected for a second term in office.

However, a suggestion by Senator Opeyemi Bamidele that Onochie be put on oath after she denied her membership of the APC, was supported by Senator Lawal Gumau (Bauchi South).

The suggestion was however opposed by Senator Ekeremadu and Senator Dickson,who argued Senate Rules do not support any nominee being placed on oath during screening.

The Chairman of the Committee, Senator Kabiru Gaya, overruled the suggestion so as not to breach the provisions of the Senate Standings Orders on screening of nominees.

Gaya said the panel’s report would be submitted to the Senate at plenary next week for consideration and possible approval after he adjourned sitting. (The Nation)