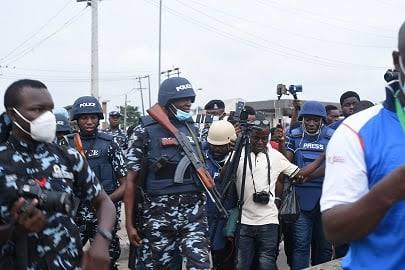 Despite the heavy presence of armed policemen and soldiers, the appearance of agitators numbering over 100 at the surroundings of Gani Fawehinmi Park, Ojota caught the operatives unaware.

The Commissioner of Police, Lagos State Police Command, CP Hakeem Odumosu was addressing journalists when placard-carrying protesters, who chanted different secession songs for the Yoruba Nation, began to trickle in.

They had disguised like residents who were listening to the police boss.

But in a dramatic way, the protesters side reactions while the commissioner was speaking to journalists caught everyone by surprise, but as soon as Odumosu left, the agitators pulled out their banners, wore their branded Yoruba Nation T-shirts and started chanting solidarity songs.

They also waved ‘Oduduwa nation’ flags and banners, clamouring for a ‘sovereign’ state.

Many had expected the protesters would show up at the Ojota venue with a big banner and a sort of entry march, but our reporters gathered that the protesters had placed themselves at strategic points but only waited for the best time to launch their rally.

After a 10-minute showdown with many of them registering their displeasure, police shot into the air, used water cannons and also unleashed tear gas canisters in an attempt to disperse the protesters.

The police also arrested some of the protesters, who were carried away in their vans.

Odumosu said he was at the venue with security officials to guarantee law and order in the state.

He said though the protesters had promised to engage in a peaceful protest, he refused to grant them permission to hold the rally because of the monumental destruction and killings that were recorded in the state during last year’s #EndSARS protest.

Similarly, women clad in white attire believed to be traditionalists also put up a show at the rally ground.

They sang unity songs as they marched around the Ojota venue. (The Nation)