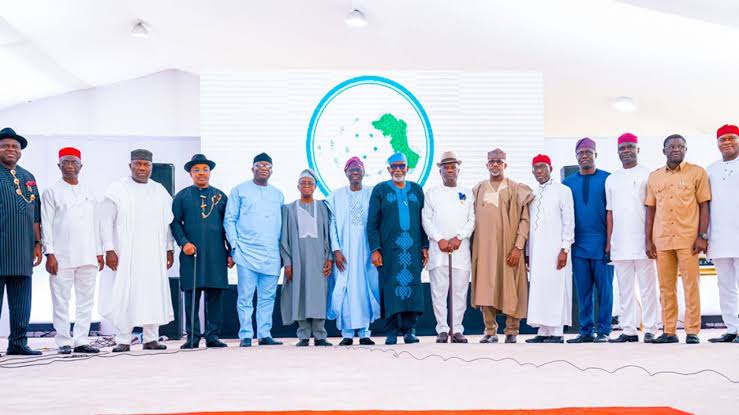 Governors of the 17 southern states have unanimously agreed that the next President of Nigeria should emerge from their region, puncturing the ambition of prominent politicians from the North.

The governors under the aegis of the Southern Governors Forum (SGF) made their stance known on Monday after a closed-door meeting which lasted for about five hours in Lagos.

Even though the governors spoke on insecurity in their region and also chided the federal government for not consulting them before security operatives carried out some recent offensives, they were short of mentioning the names of those fomenting trouble in the South East and South West.

The leader of the proscribed Indigenous People of Biafra (IPOB), Nnamdi who was taken to court on Tuesday last week after he was extradited was not mentioned by the 17 southern governors.

Also, the name of Yoruba secessionist, Sunday Igboho, whose house was raided by operatives of the State Security Service (SSS), was also not mentioned in the communiqué issued by the southern governors.

The Northern Elders Forum (NEF) and other notable personalities said there was no way the region could be intimated, insisting that democracy had its tenets which must be respected.

The governors, according to the communiqué issued also discussed the current security situation in the country, open grazing, constitutional amendment and Petroleum Industry Bill (PIB).

They, however, reaffirmed their commitment to the unity of Nigeria on the pillars of equity, fairness, justice, progress and peaceful co-existence between and amongst its people.

Governors who attended the meeting are the Chairman of the forum and Governor of Ondo State, Rotimi Akeredolu; Dapo Abiodun of Ogun, Gboyega Oyetola of Osun State, Ifeanyi Okowa of Delta,  Nyesom Wike of Rivers; Seyi Makinde of Oyo; Kayode Fayemi of Ekiti; Douye Diri of Bayelsa,  Ifeanyi Ugwuanyi of Enugu and Emmanuel Udom of Akwa Ibom.

While the governors of Anambra and Cross River were absent, those of Edo, Imo, Abia and Ebonyi states were represented by their deputies.

The decision of the 17 governors – drawn from three different political parties- to unanimously agree that the president should come from the South in 2023 is seen as a landmark decision.

It may appear that the southern governors have coalesced into a single force, a development that would most likely alter the political configuration of some northern politicians.

The ruling All Progressives Congress (APC) has eight governors from the region, same as the main opposition Peoples Democratic Party (PDP) while the All Progressives Grand Alliance (APGA) has one governor.

According to the communiqué by the governors, “The Forum reiterates its commitment to the politics of equity, fairness and unanimously agrees that the presidency of Nigeria be rotated between southern and northern Nigeria and resolved that the next president of Nigeria should emerge from the southern region.”

If this decision comes to fruition, it would have ended the ambition of key politicians in the North that have shown interest in contesting the 2023 presidential election.

Former Vice President Atiku Abubakar from Adamawa State, former Governor Rabiu Kwankwaso from Kano State, Governor Yahaya Bello of Kogi State and Governor Aminu Tambuwal of Sokoto State are among major contenders for the 2023 presidential poll. Others are Governor Bala Mohammed from Bauchi State and former Governor Ahmed Sani Yarima from Zamfara State. Most of them have directly or by proxy indicated interest to vie for the presidency.

From the South, former governor of Lagos State, Bola Tinubu, Governor Kayode Fayemi of Ekiti State, Dave Umahi of Ebonyi State; former Governor Rochas Okorocha of Imo State, Minister of Transportation and former Governor of Rivers State, Rotimi Amaechi and former Governor Donald Duke of Cross River State are among southern politicians who are said to be eyeing the number one position in the country in 2023.