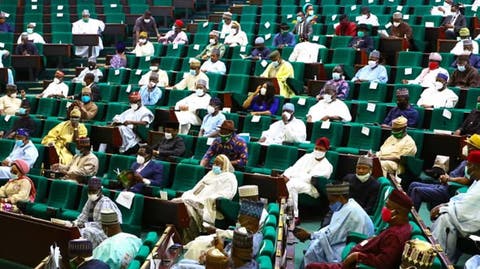 Members of the main opposition People’s Democratic Party, PDP, on Tuesday staged a walkout from the chambers while plenary was still ongoing.

The reason however stemmed from the rejection of the point of order raised by their leader, Hon. Kingsley Chinda who had asked speaker Femi Gbajabiamila as an additional prayer to the setting up of the Committee to probe the Twitter ban urge the federal government to rescind its decision pending when the interface was concluded.

But the speaker rejected the point of order, saying that a decision had already to take on the matter and a Committee was mandated to probe the circumstances of the ban.

He, therefore, asked Chinda to resume his seat but the lawmaker who was still upstanding continued with his motion.

Swiftly, the Leader of the House, Ado Doguwa lent his voice, asking Chinda to comply with the speaker’s directive.

Similarly, the Chief Whip of the House, Hon. Mohammed Mongunu asked Chinda to also sit down and allow the matter as the Speaker had ruled.

Seeing that the House was getting seated up, the Speaker quickly moved on with the proceedings, calling for the attention of the House, ignoring Chinda.

At his juncture, Chinda and his colleagues gathered their belongings, ready to exit the chamber.

Just then, shouts of “you can leave, you can go” emerged from some members who asked them the leave.

While the proceedings resumed, Hon. Yusuf Gagdi from Plateau State raised a point of Order, saying that his privilege has been breached.

He told the House that some members of the opposition had vowed a few days ago to disrupt today’s proceedings should the Speaker fail to allow them discuss the twitter ban.

Gagdi said that the report breached his privileges as a member of the parliament, calling for investigation of his colleagues who made the utterances.

But the speaker in his response pleaded that the matter be allowed to rest, having set up a Committee.

He described as unfortunate a situation where some “seasoned lawmakers” knowing the rules would still deliberately device a means to disrupt the House.

Addressing the Press Corps later, the PDP Caucus led by Chinda said that the point of order was an added prayer to the Speaker’s speech.

While he commended Gbajabiamila for the proactive measure, he said that 10 days was a long period of time for Nigerians to wait before resuming their Twitter operations.

He said it was wrong for the speaker to have ruled him out of order.

The Caucus however vowed to continue to tweet despite the directive by the Minister of Justice and Attorney-General of the Federation, AGF, Abubakar Malami.