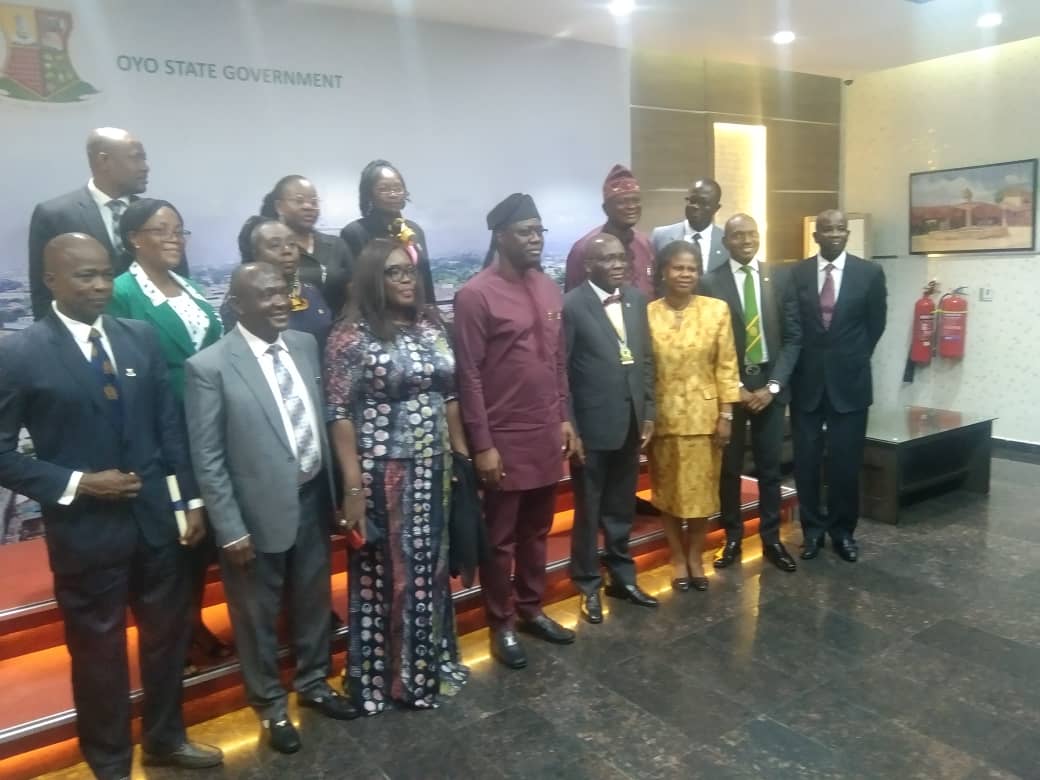 Oyo State Governor, ‘Seyi Makinde, has said that his administration will collaborate with the Chartered Institute of Bankers of Nigeria (CIBN) on physical development and capacity building for its relevant workforce in the state.

Governor Makinde, while receiving the CIBN team led by its President, Mr. Bayo Olugbemi, who paid him a courtesy visit  in his office, at the Secretariat, Agodi, Ibadan, said that his administration is planning to equally integrate banks’ Closed-Circuit Television (CCTV), into the state’s security network to improve security within and outside the banking environments.

A statement by the Chief Press Secretary to Governor Makinde, Mr. Taiwo Adisa, quoted the governor as commending the efforts of the institute and indeed the banking industry for its various contributions to the development of the state, especially toward ensuring an efficient and effective security system.

He added that his administration will continue to support the institution’s activities.

He said: “It will always be my pleasure to support CIBN activities. I believe some of the things you listed, like having you contribute to the budgetary process, is on currently. We invited CIBN and even other professional bodies.

“We went round the state to have stakeholders’ engagements at the local levels and all those inputs were put together for our budget. So, if you are not aware or it was not done through the proper channel, I think they are aware now and will do it.

“On the request for the members of civil service here to take advantage of training and retraining from the institute, we will look into that. I know that one thing this administration has done is to give opportunities to our people to up their game. So, this actually fits into our efforts in that direction, and we will take advantage of that.

“Also, we will be willing to share our own experiences dealing with governance at both the state and the local levels. So, collaborating with the CIBN is, for me, a given and I will always look from a situation where both sides have benefits to take out of such interaction.

“As an administration, we are pushing really hard on the security of lives and property and you will agree with me that banking environments are places that are vulnerable and prone to attacks.

“We have, through the Executive Assistant on Security, tried to reach out to banks around here to install CCTV cameras and basically integrate them into our own security network.

“Even though I may go out to take responsibilities for some of the lapses in the area of security, it is actually something that is collective. In the report I read yesterday, a village head and his wife were kidnapped. We have said to the people within that environment that if they see something, they should say something to us. We have the 615 emergency security number. They should call the number and we will do our own bit to respond quickly. I will be glad if the institute is able to support and assist us, which I think will lead to a little bit of improvement.”

The governor promised to make land available for the institution to build its Secretariat in Oyo State so as to allow CIBN contribute to the expansion of the economy of the state.

“The SSG is here and we have heard all your requests. I think the least of our problems is to find land for you and we will definitely do that.

“We want physical development because we want to expand our economy. So, once we see people that are willing to build, we will definitely make land available for them,” Makinde said.

Earlier in his remarks, the CIBN President, Mr. Olugbemi, explained that the banking industry would continue to partner with the state government towards achieving its goal of taking Oyo State to  greater heights.

He reiterated CIBN’s readiness to collaborate with the government in organising a yearly seminar on banking and allied matters for the Oyo State Judiciary.

According to him, CIBN would leverage on its over 20 years’ experience of running similar programmes for all judges in the country, in collaboration with the National Judicial Institute.

He further said that the institute would be most willing to partner with the relevant ministries of the state government to enhance the capacity of their personnel in the area of banking and finance.

“I am happy to be here in Ibadan. We thank you for giving us the opportunity to have this audience with you today and we commend your laudable achievement, especially in the areas of education, infrastructure, youth development, security, and other sectors in the state.

“We want to appreciate your support to the banking industry by way of support and effective security system, which has provided an enviable environment for the banking and finance industry to thrive in the state.

“We are here to discuss how we can deepen the relationship with the Oyo State Government towards the growth and development of the state and the nation at large,” Olugbemi added.