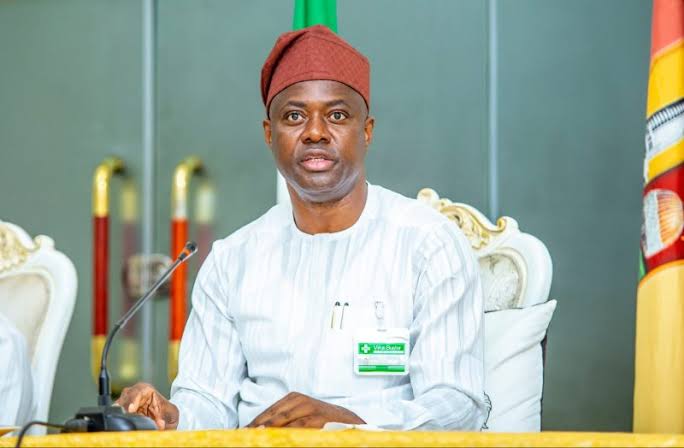 The leadership of Oyo State chapter of the People’s Democratic Party and public officers elected on its platform on Friday affirmed and identified with the leadership of Engineer Seyi Oluseyi Makinde as the authentic leader of the party in Oyo State and South Western Zone.

This was contained in a statement signed by all the State Party Executives excluding two members, Members of the National Assembly including Sen Kola Balogun except One, 26 Members of the State House of Assembly, All the thirty three (33) elected Council Chairmen and Chairpersons and Thirty One out of thirty three local government party chairmen.

According to the statement, We use this medium to announce that our position in Oyo State PDP is in alignment with the position of our amiable governor and leader of our party in the South West, Engineer Seyi Makinde on the areas of security of lives and properties.”

“We enjoin all the relevant security agencies to justify the good disposition of the governor towards them and see to curbing crimes in our State.”

“We want to implore dissident voices that are fanning the flames of discord in our party to desist from such acts as the entire leadership of the party will henceforth not tolerate indiscipline and public defamation of the image of our party and the government by some sectarian elements in the party.”

“We want to make it unequivocally clear that our party is not divided and we do not have factions. We are united and the party is becoming stronger daily under the leadership of Alhaji Omokunmi Mustapha and Governor Seyi Makinde.”

“We also wish to state that the winning team, the executives that won elections i.e the present set of PDP Executives are united and we are running the party according to the provisions of the constitution of our party.”

“We say that those calling for the dissolution of the State Party Executives are ill-advised, misinformed, insensitive, forgetful and deliberately malicious. The State Party leadership is fine and we are solidly behind our hardworking governor.”

“It is important to remind those who are enemies of success that when these current set of Oyo State PDP Executives came on board, there was no single national/ state house of assembly member neither was the party winning elections.”

“The current set of Executives has led the party to win gubernatorial election, a senatorial seat, four house of representative seats, 26 out of 32 houses of assembly members and also conducted, monitored and oversaw the  LG elections where the party won all the 33 Chairmanship Seats and 90% f the Councillorship positions. It is sheer wickedness to call for the dissolution of a winning team”

“We want to also implore the entire populace of Oyo State to continue to support the governor of Oyo State in his quest to restore our state back to the pacesetting pedestals. The governor has done well in the past two years of his administration despite that the fact that we inherited a state that was badly battered, almost destroyed and our funds and resources seriously injured by the inhumane, wicked, unkind, unfair and the corrupt government of the APC and their failed leaders.”

“We find it rather laughable and preposterous that majority of the so called, self-acclaimed and passive leaders who are defaming, disparaging and embarrassing the hard earned victory of the party today were caught in bed with the opposition parties severally before the last general elections. How do you describe PDP Leaders who publicly campaigned for candidates of other parties and even mobilized their followers to vote for ADP/ADC and APC candidates on the Election Day?”

“Many of these leaders who did not vote nor supported the candidates of the party at the national assembly and presidential elections forgot that the major negotiating data that birthed the coalition that made the gubernatorial victory easy for us was the results and the achievements of the party at the first elections which many of them worked against the interest of the party.”

“It is highly imperative to note that one of the so called leaders who even signed the poor communique at the failed Jogor centre meeting sued the party up to the Supreme Court. At what point did He actually become a true party man? “

“We want to inform the good people of Oyo State that many of these misguided leaders have left us in soul and spirit. How else do you explain the characters of PDP Leaders who hosted many figures from the opposition in their houses? We have very well publicised images of the visit of Dr. Fola Akinosun, Sen. Soji Akanbi and others few days/hours before the National Assembly elections and many of them have also hosted the gubernatorial candidate of APC in 2019 election, Chief Adebayo Adelabu, the Senator representing Oyo Central Senatorial District, Senator Teslim Folarin, and other ambitious opposition figures and we are not unaware of several nocturnal meetings of some these so called leaders with leading top – notch figures from the APC like Senator Bola Ahmed Tinubu.”

“Their game plan is to frustrate, truncate and destroy the relative peace we currently enjoy in Oyo State PDP and mortgage our hardworking governor for their selfish agenda of handing over Oyo State into the hands of the wicked, inhumane and high handed APC.”

“We want to thank the good people of Oyo State who actually separated the wheat from the chaff in the current situation in Oyo State. We are certain and we want to assure the good people of Oyo State that our governor is working assiduously with every relevant persons, institutions, agencies and stakeholders to ensure that Ibarapa, Oke-Ogun, Ogbomoso, Oyo and Ibadan is more secured and conducive for all.”

“We want to say it with all confidence that under Governor Seyi Makinde and PDP, a better Oyo State is assured.”