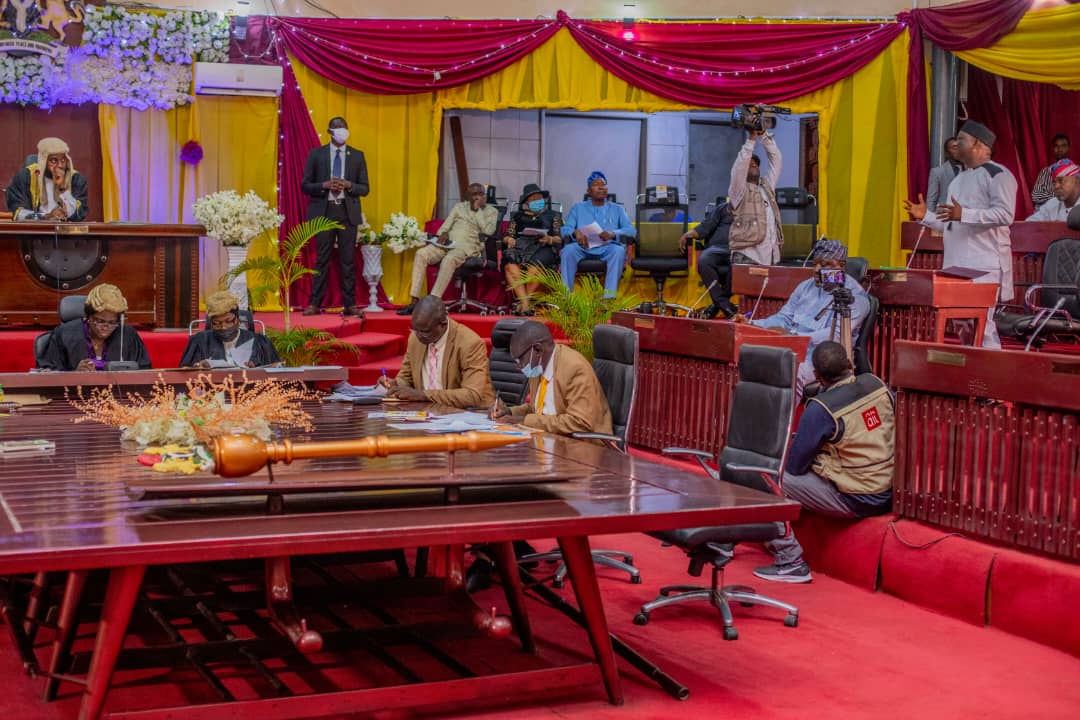 The Oyo State House of Assembly has celebrated its 2nd Anniversary with a call to the Federal Government to begin the process of restructuring the Country.

The Anniversary was marked with a special plenary session which was attended by the Oyo State Governor, Engr Seyi Makinde and other political functionaries and dignitaries.

In his Anniversary remark , the Speaker, Hon Adebo Ogundoyin said with the various challenges confronting the nation, there could not have been a more better time than now for the nation to hearken to the call for restructuring of the country.

He added that the restructuring should commence with the review of the 1999 Constitution.

The Speaker noted that the federal government was having too much power, adding that it should devolve some power to the State and Local councils.

” There’s too much concentration of power at the Center. As a House we are saying that some items in the Exclusive Legislative List like , Item 2 (Arms, Ammunition and Explosives), Item 3 (Aviation), Item 39 (Mines and Minerals), Item 45 (Police and other security Agencies), Item 55 (Railways), and Item 63 (Traffic on Federal Trunk Roads) should be moved to Concurrent and Residual Legislative Lists.

” I believe if restructuring is done, States and Local Government will have the power to effectively manage their internal security using State and Local Police. This means each State will be able to tackle its security challenges headlong. I want to stress that most of the items on the Exclusive Legislative List would be more efficiently managed at the State and Local levels. He stated

While highlighting the achievements of the 9th Oyo State House of Assembly in the last two years, Hon Ogundoyin said it had passed a total of 56 bills , and made 83 resolutions.

This , he maintained was aside from the various oversight functions carried out by the Lawmakers.

” We would have achieved much more in the year under review but for the break occasioned by the Covid-19 pandemic, as well as the strike action by the Parliamentary Staff Association of Nigeria, PASAN. May I reiterate that we will not compromise on our constitutional responsibility of Law making adequate representation and effective oversights. ” Oyo Speaker said

He equally acknowledged the support the Governor has been given to the Oyo State House of Assembly, noting that the harmonious working relationship that existed between the Executive, Legislature , and the Judiciary in the State was second to none.

“It is also good to appreciate all the management and Staff of the Oyo State House of Assembly for their commitment to duty.

They said that every zone has continued to witness the transformation program of the Governor.

Highlight of the Special Plenary session was the passing of vote of confidence in the Governor Seyi Makinde whom they all described as a People’s Governor.

Recall that the 9th Assembly was inaugurated on 10th June, 2019.