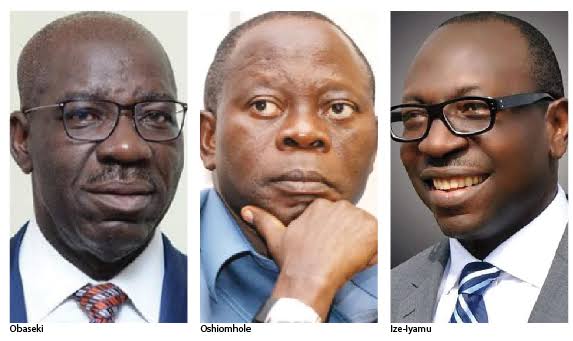 Immediate past National Chairman of the All Progressives Congress, Adams Oshiomhole, and the APC candidate in the September 19, 2020, Edo State Governorship election, Osagie Ize-Iyamu, have appealed to Governor Godwin Obaseki, to be magnanimous in victory.

Specifically, they appealed to Obaseki to consider a political solution to the case involving members-elect of the State Assembly who failed to present themselves for inauguration.

In his letter to Obaseki, which was made public by Oshiomhole’s media aide, Victor Oshioke, in Benin, on Monday, Mouthpiece NGR gathered that the former APC national chairman urged the governor to put the past behind.

The letter read in part: “Congratulations on your victory at the Supreme Court which has effectively laid to rest all matters arising from the last election.

“As I had repeatedly reminded you during our several meetings, our relationship has through the years developed beyond being friends to being brothers of different parents.

“Whatever happened is unfortunate and I believe God has a reason for everything. I have put all behind me and moved on. As I have consistently advised, please be magnanimous in victory. You are the Governor of all Edo people, regardless of political leanings.

On his part, Ize-Iyamu, who dwelt on the issue of the 14 lawmakers-elect and some Local Government Council Chairmen in a separate letter, said, “Though the matter is in court, you are in a vantage position to consider an out-of-court settlement of the issue, in the overall interest of our state.”

He equally wrote, “I also urge the Governor to intervene in the issue of elected Local Government Chairmen, Vice-chairmen, Councilors and Supervisory Councillors, who sometimes ago were suspended and removed from office.

“Our appeal is that you consider paying them their entitlements since it is now late for them to return to their offices. This can also be through an out of court settlement”.

“Last Friday’s judgement of the Supreme Court puts an end to the series of litigations we had over last year’s governorship elections.

“We are happy that all these cases have come to an end. Now that it is all over, please accept my congratulations.”

However, the Edo State chapter of the PDP, which spoke through its Publicity Secretary, Chris Nehikhare said, “Now that it is clear that the APC boobytraps of unwarranted, unnecessary, mindless and malicious court cases have collapsed, we have entered the season of congratulatory messages.

“Edo PDP thanks all Nigerians, especially Edo people, who have congratulated us and of course His Excellency, Governor Godwin Obaseki, on the resounding victory he recorded at the Supreme Court on Friday, May 28, 2021.” (Punch)