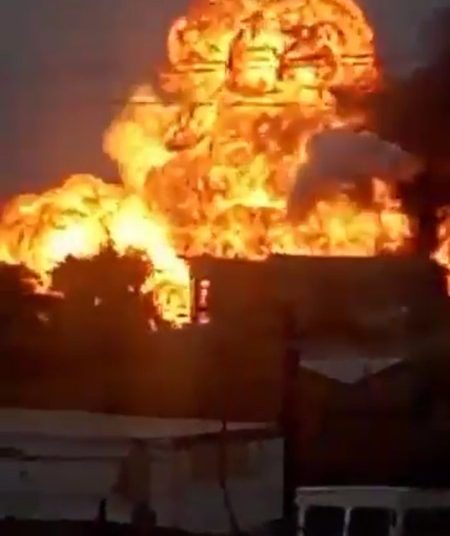 Federal firefighter narrowly escaped death, on Tuesday, while trying to put off the fire that gutted the National Youth Service Corps (NYSC) office on the second floor at the federal secretariat in Asaba, Delta State.

The firefighter, who was rescued after falling off the outer component of an air conditioner where he took position was rushed to the Federal medical centre Asaba where he is said to be responding to treatment.

Reports from Delta State capital said it took combined efforts of firemen from both the federal and state fire services to ensure the fire which started at about 7:00 am, on Tuesday, did not escalate.

Information gathered showed that the fire may have started as a result of an electrical fault from the office of the state coordinator even as files, documents, office equipment, and other valuables were reduced to ashes.

According to the State Coordinator NYSC, Mrs Olutayo Samuel, everything in their section was completely destroyed.

She said: “What happened this very early morning is very unfortunate. I got a call that our office was on fire this morning and I quickly rushed there, I don’t know how fire gutted the office. Nobody can ascertain exactly the cause of the fire.

“Virtually, everything there got burnt, everything in the office got damaged. All the file documents bunt to aches but we have a back-up. You know this is the technology age, so everything is in our system.

“Coincidentally, we took some of our systems to the camp and they are still in the camp, so there will be no setback because we have them in the system.

“I cannot cost it now but it is colossal damage. But by the Grace of God, there is no life lost because that is the most important thing. I feel good because whatever damage will be replaced but if life had lost, we couldn’t have replaced it.”