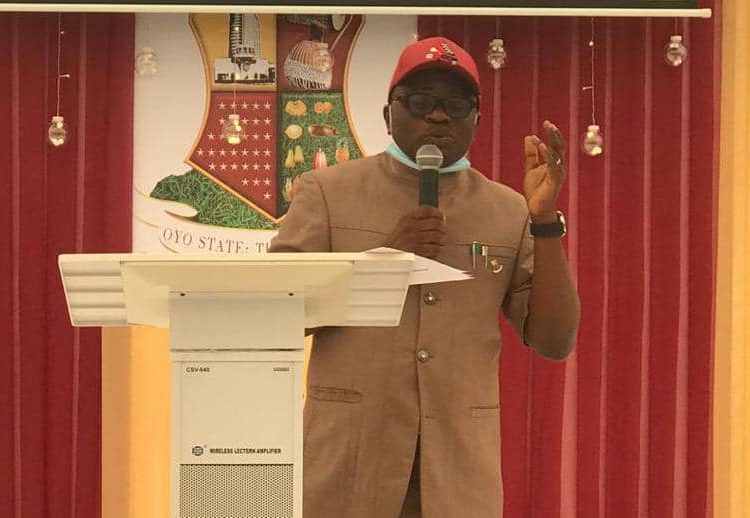 The Chief Press Secretary to Governor Seyi Makinde, Mr Taiwo Adisa, has urged the local government chairmen and vice chairmen to embark on projects and let people know about what they have done in their various local government areas.

He gave the admonition on Tuesday, at the ongoing 2-Day Retreat for local government Chairmen, Vice Chairmen and Heads of Local Government packaged by Fosterfield Consulting on behalf of the Ministry of Local Government and Chieftaincy Affairs and the Office of the Special Adviser on Strategy and Political Matters in Ibadan, the Oyo state capital.

Adisa who delivered a paper titled ‘Media And Communication Strategy Management’ urged the local government chairmen to constitute their own media structure.

His words: “Thus, as local government administrators, you have to adopt a paradigm that works, “Talk and Do.” You are not just the chief executive, deputy Chief executive or head of department as the name ordinarily connotes, effective communication strategy management would see you as a marketer of your council and to do that, you will need to take a listen to Leslie Perlow and Stephanie Williams who noted in the Harvard Business Review On Communication, that silence is extremely costly to both the individual and the organization.

“In other words, silence will kill your business. In all, you cannot afford to remain silent, if you are to be seen as maintaining an effective communication strategy.

He also spoke on the concept of ‘Talkless and Do More’ and ‘Do Less and Talk More’ in relation to governance while urging them to be careful in speaking with the media on issues that they have not been properly briefed.

He said: “Since the dawn of the Fourth Republic, which the Peoples Democratic Party (PDP) and the All Progressives Congress (APC) have distinguished themselves as the leading parties, two paradigms have emerged. One says Talk less and do more and the other says Do less and talk more. The first appears to have emerged as a motto of the PDP, while the second appears rooted within the APC. The PDP takes the Media as a back of the book project, while the APC utilizes the Media as a front of the book assignment. When the APC does little, they project it to the heavens, but the PDP man is likely to tell you: ‘our people are seeing what we are doing.’ Let me give two instances to depict the above.

“When President Goodluck Jonathan assumed office as substantive President, his kitchen cabinet coined the words “time to work.” Their idea was that the President needed time to put in place enormous performance and then the work would speak to whether he needs a second term or not. I disagreed. My proposition was that as you walk, you also talk. Thus, as Jonathan was working, APC was doing the talking. The period 2011 to 2015 was the only term the Nigerian society did not take a break after elections. The APC kickstarted merger talks and all that. The PDP government was “busy working.” The President’s disposition then was sebi dem know how to make noise, leave them to dey talk. By 2014, the PDP government had been plastered with all manners of unfounded baggages; clueless government, insecurity, corruption has all swallowed the “work” and the PDP got booted out of power in 2015.”

In a related development, the Special Adviser to Governor Seyi Makinde on Local Government and Chieftaincy Matters, Honourable Yemi Aderibigbe has called for unity among the chairmen and the vice chairmen.

Aderibigbe who delivered a paper titled ‘Ethics and Governance at the Local Government Level’ also urged the council bosses to see the Heads of Local Government as partners and always listen to advice.

He also urged them to consolidate the efforts of Governor Seyi Makinde by replicating his good works at the local government areas.