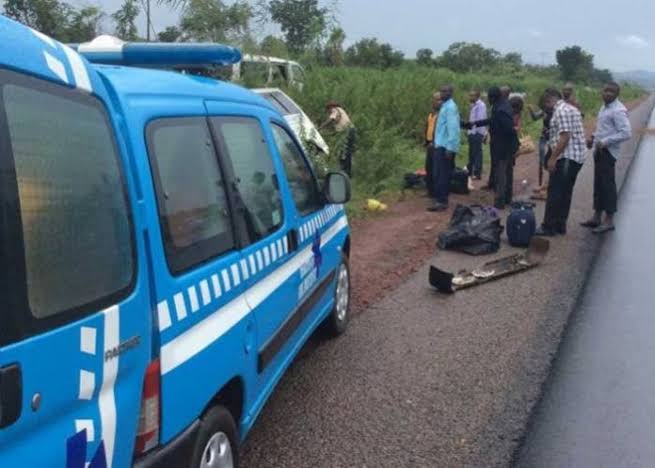 About six persons have been confirmed dead in an auto crash around Ajede Ogbere in Ijebu Ode-Ore on the Sagamu-Benin Expressway.

According to Umar, the accident occurred at 12:01 am and was caused by wrongful overtaking, excessive speed and loss of control on the part of the driver of the Luxurious bus.

He added that a total number of 39 people were involved in the accident, comprising 25 male adults and 14 female adults. Six persons were recorded dead (Five men and one woman).

He said, “The suspected causes of the multiple crashes were wrongful overtaking and excessive speed on the part of the Luxurious bus driver which led to the loss of control.

The luxurious bus hit the incoming Sienna car and the Mazda bus.

“Immediately, the driver ran away because all the occupant in the Sienna vehicle lost their lives while those in the Mazda bus sustained injuries.”

Umar explained that the deceased persons were deposited at the morgue of the General Hospital, Ijebu Ode.

He added that four people were injured and were taken to the same hospital for medical attention.

The FRSC boss described the crash as an avoidable act and advised motorists to avoid excessive speed, dangerous driving and also obey traffic rules and regulations.