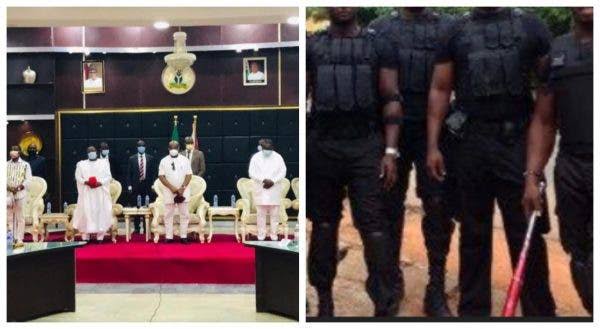 The five governors of the Southeast region, on Sunday launched Ebubeagu regional security to fight terrorism in the zone.

Vanguard reports that the Chairman Southeast governors forum and governor of Ebonyi state, Dave Umahi, disclosed this to newsmen at the Imo government house, along side with other Southeast governors. According to him, the regional security would be the joint Vigilante from Southeast with their headquarters in Enugu state.

Following the wave of attacks on public institutions especially the police stations in the South East zone, the five governors of the Southeast, have stormed Owerri on Sunday, to take strong decisions on the issue of insecurity in the zone.

Also sitting alongside with the Southeast governors’ included the President General of Ohanaeze Ndigbo world-wide, Professor George Obiozor as well as top security chiefs in the zone.