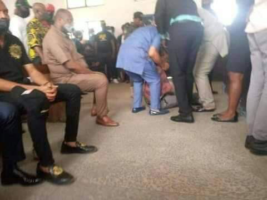 Okorcha Fainted after he and his aides were charged to court.

“Okorocha has fainted in the court room now.

Recall that the Former Imo Governor Senator Rochas Okorocha was arrested after he dared Governor Hope Uzodimma to reopen the Royal Palm Estate sealed by the State Government.

Accompanied by his son-in-law, Uche Nwosu, the former Governor broke the keys to recover the estate belonging to his wife, Nkechi.

Infuriated by the ex-Governor’s action, loyalists to the State Government confronted them in a clash that left one person injured.

Okorocha was later charged to court where he fainted and his aides were granted 70 Million naira Bail.