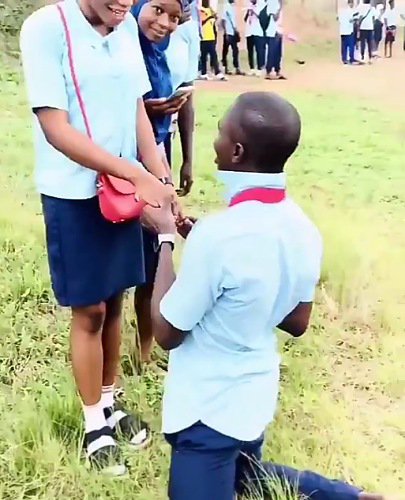 The internet went into frenzy shortly after a trending video of a SS3 student who proposed to his girl friend surfaced on Instagram.

The two students who just finished sitting for their WAEC exams were seen in a video having a slight romantic play as lover boy pulled up from behind and popped the question.

In the video, some female students were strolling when a male student came from behind, tapped his heartthrob and went down on one of his knees immediately she turned.

While on one of his knees, he then brought out what appeared to be a ring and engaged her while she screamed away in the euphoric stupor of love and excitement.

He stood and they both momentarily hugged passionately before the short clip ended.

One thought on “VIDEO: SS3 student excited as boyfriend proposes to her after their WAEC exams”