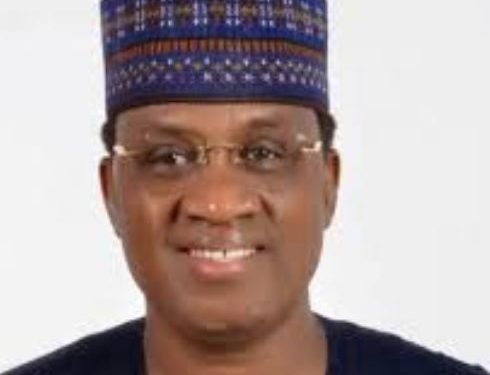 Kaduna was on Saturday agog, as supporters and followers of Senator Kabiru Marafa, stormed Kaduna in their thousands, as the Senator married out his daughter, Architect Aisha Kabiru Marafa alongside 13 orphans.

Senator Marafa who played a fatherly role also took full responsibility of 13 other female orphans whose parents were killed by bandits in Zamfara ‎and gave them out for marriage.

The marriage was conducted by the Chief Imam of the Mosque, Dr Tukur Adam Almannar who used the opportunity to call on other serving and former leaders to emulate Senator Marafa by also taking care of orphans in their localities.

Dr Almannar said the Senator did all a father will do for his daughter as well as the 13 orphans which is commendable.

“The 13 orphans were those whose parents were killed across Zamfara State due to bandits activities. We hope and pray to Almighty Allah to reward him for the gesture as we also urged other well to do to emulate him by assisting the orphans.

He also prays to God to bring an end to insurgency in states like Zamfara, Katsina, Sokoto and other parts of the country.

Meanwhile, Senator Marafa speaking to newsmen shortly after the wedding said, “My motivation to do this is the support I get from my people all the time. You can see the crowd that gathered here today, it is the demonstration of their genuine love for me, and I am not in office, I am not in control of resources. These are people who love me and believe in my struggle.

“So, I am humbled by this show of love because this wedding ceremony is supposed to take place in Zamfara, but because of the security challenges we decided to hold it here in Kaduna.

“We also decided to hold it in a low-key due to Covid-19, yet people came in large number because of their love for me”.

Talking about the security situation in Zamfara state, he appealed to President Muhammadu Buhari to please in the name of Allah implement the resolution that was passed at the tail end of the 8th National Assembly, “where we called on the federal government to extend even if it is a small fraction of what has been done in North-East should be done in Zamfara, by constituting a President Initiative Committee on Zamfara state, give the Committee a seed money of N10bn and same amount to be given every year for 10 years to assist the situation on ground.

“That is what informed my gesture to sponsor the wedding of orphans, because most of them are grown up, but their families cannot buy them even broom.

“So, I am calling on Mr President as the father of the Nation to look at that Senate resolution of 2019 and implement it because that is the only way we can curtail the spill over we are now seeing in Katsina, Sokoto and other places. Because, when people and hungry and some gives them a hundred thousand Naira and AK47, they will follow the person. But if these orphans are properly catered for and trusted persons are appointed to manage the resources, we can tame the monster called banditry to the bearest minimal,” he said.