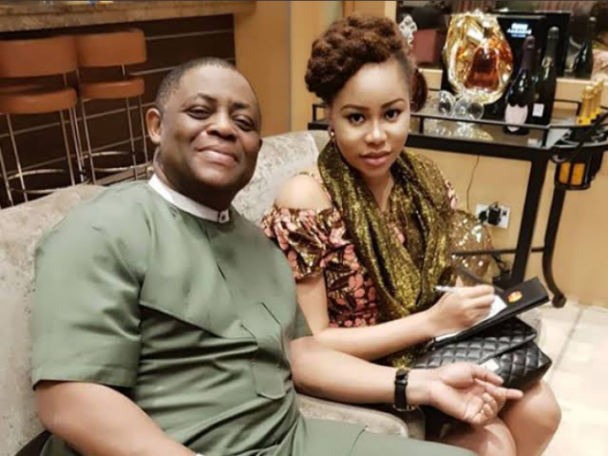 Controversial former Minister of Aviation, Femi Fani-Kayode popularly known as FFK has reportedly separated from his wife, Precious Chikwendu according to a family source.

Precious uncle,  Okey Onyemachi confirmed the incident, “I am aware that they are separated and are not staying together as we speak,”

The couple has been married since 2014, have four sons, including a set of two-year-old triplets.

A family source said on Wednesday that the marriage broke down due to a health challenge which Chikwendu has been trying to manage since they became a couple.

However, Fani-Kayode has filed a pre-litigation letter to the blogger demanding 2bn, Stella Dimokorkus, who reported the allegation.

In a letter signed by his lawyer, Mr. Adeola Adedipe, dated September 16, 2020, the former minister described the report as preposterous.

The letter titled, ‘Defamation of Chief Femi Fani-Kayode- Re: Femi Fani-Kayode and Precious Chikwendu Part Ways Over Alleged Domestic Violence’, stated that the allegations were spurious and maliciously engineered.

The former minister said he was disturbed about the manner in which the report was written which insults the sensibilities of unsuspecting readers.

“I am unhappy about the reports and my major concern is the children and why people are cooking up fake stories. The allegations that the kids aren’t chief’s is a big lie and unthinkable. Precious is my niece and I can confirm that all these stories are false.”

Dr Kemi Olunloyo wrote on her Official Twitter Page (@KemiOlunloyo) monitored by SOJ WORLDWIDE ONLINE NEWS one of the reasons there was a separation,

“#FFKCase Sources @PoliceNG say Mrs Precious Fani-Kayode was arrested in a hotel room with a married naval officer who was charged with adultery a crime in Northern Nigeria. They called FFK to the red handed scene. They were both charged with conspiracy to KILL Femi.

“#FFKCase Later that night Precious was reportedly chased out of the hotel by management because three different men met her there three consecutive nights and hotel management said it wasn’t appropriate for a married woman living locally to be staying there.”

“#FFKCase It is not clear who confessed the plan to MURDER Femi but the married naval officer was charged with adultery and CONSPIRACY to MURDER according to police files. The person that would be Allegedly murdered was Chief Femi Fani-Kayode.”

“#FFKCase Femi Fani-Kayode was PRESENT when @policeNG caught his wife with the married naval officer. He had been looking for his wife because she always told him she was hearing voices in her head then wandered out in the streets of Abuja at night. Yes he was present.”

“#FFKCase When Mrs Precious Fani-Kayode was committed to a mental hospital, it was for 3 months but she begged to go home after 3 weeks and was treated outpatient but reportedly stopped taking her medications and became more violent. She was reported roaming the streets of Abuja.”

Meanwhile, Mouthpiece NGR learnt that the ex-beauty Queen, Chikwendu quoted the book of Psalm 126 to show the public that God has set her free,

““When the Lord turned again the captivity of Zion, we were like them that dream.

“Then was our mouth filled with laughter, and our tongue with singing: then said they among the heathen, The Lord hath done great things for them.

“The Lord hath done great things for us; whereof we are glad.”