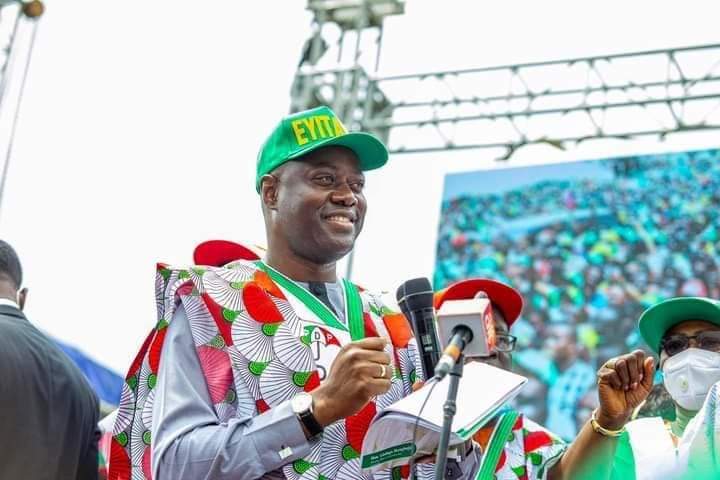 Oyo State Governor, Engineer Seyi Makinde, has urged electorates in Ondo State to come out enmasse and vote in the forthcoming governorship election in the state in October.

Makinde said this during the PDP Governorship Campaign Flag-Off in the state for the party candidate, Eyitayo Jegede.

The Oyo State governor said the forthcoming election is about the people choosing between continuous servitude and freedom.

“We want freedom for the entire South-West. It has started from Oyo state, it will continue in Ondo state on 10/10/2020. Will you rather stay with a candle when you have the sun? Ondo state is the sunshine state. They have been lighting candle for you, so it is time to let the sun shine again.

“So, you will come out, cast your votes and stay with your votes. Your votes will not only count, it will be counted and it will liberate Ondo state,” Governor Makinde said.

His Sokoto State counterpart, Hon. Aminu Waziri Tambuwal, who was also present at the event, expressed confidence that PDP would win the election.

He said, “Distinguished ladies and gentlemen, as we know, the last election in Ondo state, which party won Ondo state? – PDP. Now we expect you the good people of Ondo state, to consolidate and bring victory to PDP, by coming out on the 10th of October, 2020 and vote massively for our candidate, gentle man per excellence, Eyitayo Jegede.”

On his part, the candidate, Eyitayo Jegede said, “I speak on behalf of my running mate, Gboluga Ikengboju. By the grace of God, come 10th of October, 2020 we shall vote and we will win by the grace of God. Come 23rd of February, 2021, there will be a new face in Government House.

“The PDP flag will fly, economy will grow, there will be jobs for the youths, there will be industries, there will be agricultural development, School fees will come down. They will be joy for the people. Today, we serve notice on the APC government and by the grace of God; they will pack and leave the Government House for us,” he said.

The chairman of PDP in Ondo State, Alhaji Fatai Adam, who also spoke said the emergence of Eyitayo Jegede will lead the party to Alagbaka (Ondo State Government House).

“We are going to have a government of the people, by the people and for the people. It is no longer going to be a government for the Imo and Ibadan. Eyitayo Jgede will bring relief to our people in Ondo state. The PDP government will usher in good governance in our dear state.

“Industrial development will cut across the three senatorial districts. It is not going to be a government of one family but a government that will usher in good tidings to everybody’s home. Vote wisely and vote Eyitayo Jegede, vote PDP come October 10,” he said.