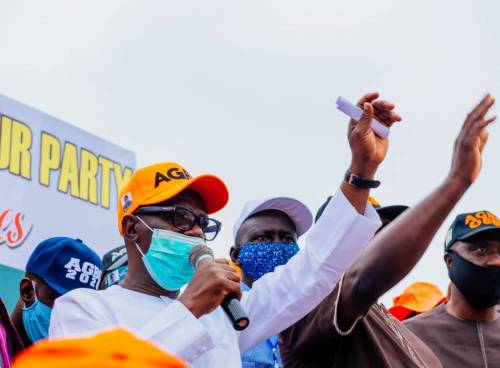 Agboola Ajayi, deputy governor of Ondo State, on Friday officially defected to the Zenith Labour Party from the Peoples Democratic Party after weeks of speculation.

Ajayi was received into ZLP by the party’s state Chairman, Mr Joseph Akinlaja, in Akure, the state capital.

He was welcomed by the immediate-past governor of Ondo, Olusegun Mimiko, during a ceremony to welcome him.

Speaking at the event, Ajayi said his decision to pitch tenet with the ZLP was as a result of the fallout in the primaries of both the Peoples Democratic Party and the All Progressives Congress.

He said, “It is obvious that the affirmation of Governor Oluwarotimi Akeredolu as candidate of the APC coupled with the seeming failure of the PDP to produce a dependable and formidable alternative has dampened the democratic enthusiasm and morale of the people.

“The hope and rechannel the energy of the progressive electorates, I am teaming up with members of the ZLP, a chunk of most of the other members and my teeming allies from both the PDP and APC.”

He described the ZLP as a dependable platform to rescue the people of the state from the hands of the current government of APC in the state.

The deputy governor also asked his supporters to join him in the Zenith Labour Party, noting that there was need to change and take it back from the “nepotistic administration” of Governor Akeredolu.

Earlier, Mr Akinlaja said the ZLP was the third force that would win the governorship election but pleaded with supporters of the party especially the youth to shun thuggery and violence.

He called on the Independent National Electoral Commission to be fair, free and transparent in the conduct of the election.

Ex-lawmakers, Kasim Olanrewaju and Olumide Araoyinbo, led some members from the PDP and APC to the ZLP.