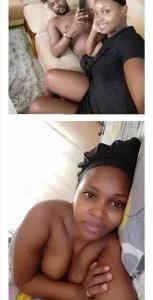 Despite the fact that ladies have been advised not to share their nude pics with any man on social media, a young nurse whose full name yet to be known over the weekend fall victim after her naked pics was leaked online.

Mouthpiece NGR reports that the internet went into frenzy after a naked photos of a pretty nurse who works at the Maua Methodist Hospital in Kenya surfaced online.

She is facing endless trolls on social media with moral cops in castigation.

According to her, she regrets sharing her private photos after an unknown person released them on the internet.

In one of the photos, the beautiful nurse is seen taking a selfie in bed stark unclad while flashing her nicely shaped behind and biting her fingers, whiles another video spots her posing with a man who is lying on a couch shirtless.

The health worker who calls herself Mac Kris on Facebook posted something on her wall after the nudes spread online like bushfire.

At the end of the day we all humans, you may view yourself holy and mighty than others. Everybody has a dark past but we quick to judge others. Those calling me names, trolling me, defaming me, I don’t have to explain myself to anyone but those who know me know me. Let’s never be too quick!” Mac Kris Post And Photos Below;