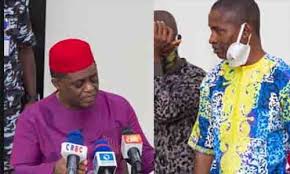 A former Minister of Aviation , Chief Femi Fani- Kayode , has apologised for referring to a journalist , Eyo Charles, as “stupid ”.
Fani- Kayode said this in a statement on Wednesday .
He said, “I met with my advisors till late last night and I wish to say the following . I hereby withdraw the word ‘ stupid ’ which I used in my encounter with a journalist in Calabar . I have many friends in the media who I offended by losing my cool and using such words . I hereby express my regrets for doing so . ”
The former minister , however , denied allegations that he was threatening to harm the Daily Trust reporter .
“I do , however , wish to state categorically that no threat of physical harm was ever made to the journalist in question and neither did I send anyone to threaten him. Anyone that says otherwise is lying and I challenge them to bring the proof .

“I would never seek to physically harm a journalist . For the last 30 years I have defended and worked with journalists and fought for the right of freedom of expression , ” he said.
Fani- Kayode said he remained a friend of the media and would be the last to seek to disparage those that are honourable and noble within its ranks .
The former minister had come under heavy criticism for calling the reporter ‘ stupid ’ during a press conference in Calabar , the Cross River State capital .
In a video that has since gone viral on social media , Fani-Kayode is seen giving the Daily Trust reporter a dressing down for asking him a “stupid question ” .
The journalist was said to have asked Fani- Kayode who bankrolled his recent tour of several southern states .
However , the former minister , who was infuriated by the question , said the journalist was stupid .
He said, “ I am saying this on live TV . What type of stupid question is that? Bankrolling who? Do you know who you are talking to ? I will not take any questions from this man . What type of insulting question is that? Which bankroll ? To do what ? Who can give me money for anything ? Who do you think you are talking to ? Go and report yourself to your publisher? Please don’ t insult me here . I don ’ t want to take any questions from this man .

“I could see from your face before you got here, how stupid you are . Don ’ t ever talk to me like that. Who do you think you ’ re talking to ? Bankroll who? You think I am one of those ones you … from who, when , how? You have a small mind, very small mind. Don’ t judge me by your own standards . ”
The Nigeria Union of Journalists had condemned the former minister while the management of Daily Trust had threatened to report to the police if any harm came to its reporter.