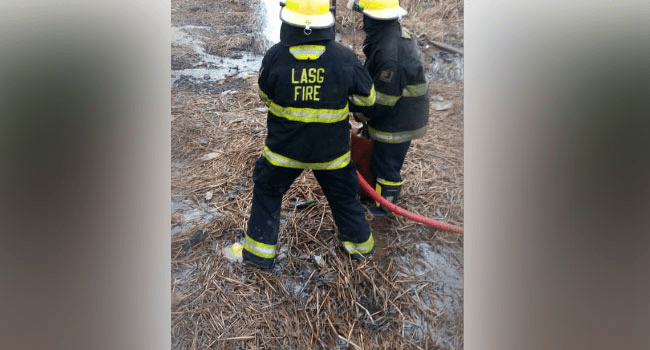 The Lagos State Fire and Rescue Service has announced the leakage of a Petroleum Motor Spirit (PMS) at Iyana- Odo on Atlas Cove-Mosimi System 2B Pipeline segment.

This was revealed on Sunday by the Acting Head of the Lagos State Fire and Rescue Service, Mrs. Margret Adeseye.

Mrs. Adeseye said that firefighters have been mobilised to the scene after a distress call was received in the early hours of today from Peace Estate, Isheri.

The Acting Head noted that PMS was gushing out from the pipeline linking Isheri to Igando and environs of Alimosho.

“On getting there, it was discovered that PMS was gushing out from the pipeline linking Isheri to Igando and environs of Alimosho, Lagos”, she stated.

According to her, the Nigerian National Petroleum Corporation (NNPC) pumping operations have been suspended as a result of that, while men of the Lagos State Fire and Rescue Service are putting the situation under control and officials of the Nigeria Security and Civil Defence Corps (NSCDC) are also on ground to forestall any imminent danger.

She called on the residence of the area not to open fire along this axis in order to avert danger pending the conclusion of the repair works by the NNPC.