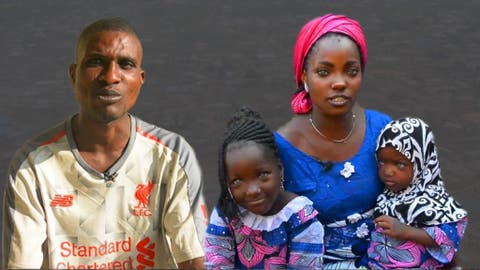 Mr. Abdulwasiu Omo-Dada, the husband of Risikat Azeez, who was allegedly driven out of her matrimonial home on account of her blue eyes, has given reasons for separating from his wife.

In an exclusive interview, Abdulwasiu denied dumping the 30-year-old mother and their two daughters because of the colour of their eyes.

Contrary to Risikat’s claim, Abdulwasiu said he was attracted to Risikat because of her blue eyes.

He alleged that his former wife was malcontent, adding that he catered for the family with the little he had.

Abdulwasiu said, “It was because of her eyes that I fell in love with her and married her. Without much ado, our relationship progressed and it was a good one. We would even wear outfits made of the same fabrics. We have children.

“For her to now turn around and tarnish my name everywhere… well, I accept it as the will of God. I couldn’t have left her because of her eyes because I loved her as my wife.

“All the image-tarnishing stories she had been telling about me, I have been tolerating them. I didn’t quarrel with her, I didn’t beat her; in fact, I never used to make things hard for her.

“Sometimes, she would cook, and when I asked if she made mine, she would say no and I wouldn’t make an issue of it.

“Instead, I would ride my bike to get bread; but if I attempt to take stew from the pot, she would collect the plate from me. I’m not lying against her, if I had wanted to, I wouldn’t be sharing all these details.”

On the allegation that he was pushed by his family to dump his wife, Abdulwasiu added, “My parents never asked me to dump her because of her eyes. She’s knowledgeable and can see.

“I’m even happy that our kids have blue eyes. If they didn’t have her kind of eyes, I would have been hurt. My parents never said so and I didn’t even think about it.”

He also denied claims of not providing for the welfare of his children, explaining that “the longest I have gone without seeing them is one month. Every other week, I would visit them and go with rice, beans, sometimes bread and juice.

Abdulwasiu expressed regrets that his children were displayed on social media to solicit for funds.

“I have been providing for her and the children, even to the knowledge of her parents; but they were not satisfied, until they posted pictures of my children on Facebook, using them to beg for alms. They claimed that I wasn’t providing for my family.

“It’s because I have no one. If I had influential folks, I would have gone to pick them since.

“They are looking for sudden wealth, sudden riches from people. Even me, who spent all I had to take care of the kids, I haven’t gone to meet anyone for help. I tried my best and ask God for help,” he added.

Risikat had said, “I heard that my husband said he left me because I was a malcontent woman and not because of my eyes.

“The fact of the matter is, he left because of my eyes. His family members told him that they didn’t like our eyes and he started behaving the way he did; he stopped sleeping at home, and we had no food, nothing.”

Meanwhile, concerned Nigerians at home and abroad had offered to help the 30-year-old mother-of-two, who narrated the experience she had been facing for having blue eyes.

Among them is the wife of Kwara State Governor, Mrs. Olufolake Abdulrazaq, who also offered to mediate between Risikat and Abdulwasiu.