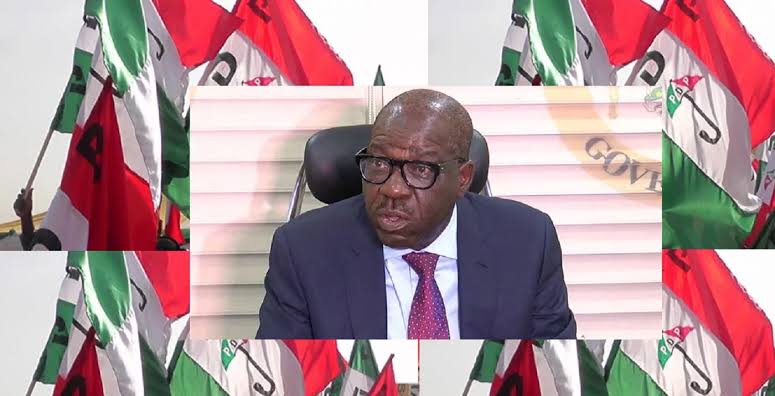 Mouthpiece NGR learnt the governor picked the form earlier today as he officially defected to the party.

The party has therefore postponed its primaries to the 23 of June.

In the wake of the development, a support group in the PDP, “The PDP Youths For Reformed Edo” has vowed to drag Obaseki before Ayelala to swear an oath of allegiance to their party members before they can give him support.

Ayelala is an effective deity known for instant justice.

The group in a press statement by its Chairman Wilson Osamede made it clear that Obaseki can not be given the ticket in PDP if he does not swear to an oath to carry the party members along.

He said members who are the grassroots network in PDP would not work if they would not be rewarded upon victory.

They claim only a spiritual deity can make Obaseki serious as the Governor was known to have a history of disobeying authorities and his helpers.

The statement reads, “It has just come to our notice that His Excellency the Governor of Edo State, Godwin Obaseki has just purchased the PDP governorship ticket.”

“We want to make it unequivocally clear that we would not support the candidacy of Obaseki if he does not take an oath before a spiritual deity.”

“Obaseki who is a serial betrayal can not come over to our party and take over the structure completely just because he gave the party leaders 8 Billion Naira.”

“We are aware of the dirty deals and compromise of our aspirants but we want to warn the party that Obaseki has a history of betrayal.”

“He should swear before Ayelala to ascertain that we would not be used and dumped.”

“A man who threw away his campaign manager as soon as he was sworn in as Governor.”

“What hope do we now have that he won’t dump us when he just met us at the junction?”

“The terse statement further stated that failure for the Party and Obaseki to take the oath before the spiritual deity would lead to mass defection from the party.”

“Lots of stakeholders have been kicking against Obaseki’s entrance to the PDP citing intolerance and ingratitude as Obaseki’s bane.