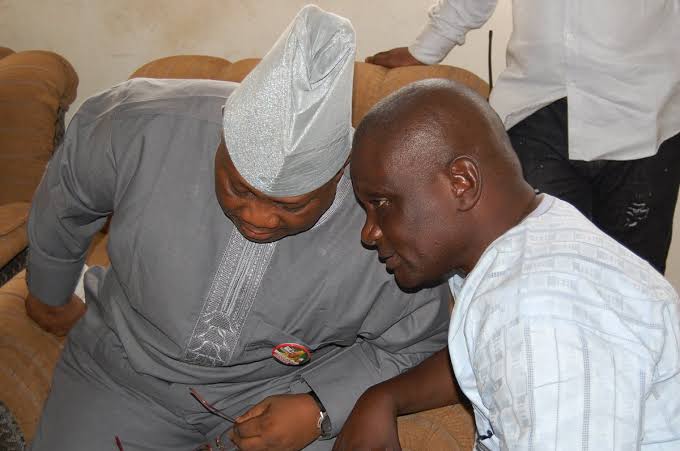 WITH the governorship election two years away, the Osun State chapter of the Peoples Democratic Party (PDP) is involved in an intense muscle flexing.

“The matter is that the Adelekes are bent on hijacking the party. The members of the PDP South-West Committee, headed by Chief Eddy Olafeso, have completed their term in office,” said Senator Olu Alabi, medical doctor and member of the PDP Board of Trustees (BoT).

“So, we rezoned the posts among the six states in the South-West. The current members want a second term. At the South-West meeting held at the residence of the governor of Oyo State, Seyi Makinde, in Ibadan, Olafeso pleaded that he should be allowed to return for a second term since he is no longer interested in the governorship race in Ondo State.

“Meanwhile, Lagos State PDP said it wanted the post of zonal secretary. And when we were contacted in Osun, we said we were not interested in the post because the outgoing secretary is Reverend Bunmi Jenyo. But he is the one behind the crisis in the Osun State chapter of the party. He is working for the camp of Adeleke, taking correspondence to Abuja on behalf of the group, because of his position.”

“So, they were not happy when the post of secretary was zoned to Lagos. Therefore, they renewed the battle that Soji Adagunodo must go as the Osun PDP chairman. They accused him of engaging in anti-party activities and contributed to the loss of the PDP in the 2019 elections. You are accusing a man who hails from the senatorial district that the party won in the election. During his tenure, we won the governorship election. But the victory was snatched from us in the court on the ground that the academic qualification of our candidate was not complete. So, how can you accuse Adagunodo of indulging in anti-party activities?”.

The National Working Committee of the party had on last Thursday asked Adagunodo to step aside as the party helmsman in the state and directed the Vice Chairman to take charge of the affairs of the party pending when full investigation of allegation of maladministration, anti-party activities among others levelled against him are determined by the party’s disciplinary committee.

The suspension letter issued on Adagunodo was signed by Senator Usman Tsauri, the National Secretary of the party. The NWC had received and reviewed the report of the committee and certified that there are merits in the complaints as found by the committee.

He was also directed to handover all the documents and property of the party in his custody to the state Deputy Chairman, Elder Sunday Akanfe Atidade, who would henceforth serve as the state Chairman of the party.

However, Adagunodo had made the claim in a press statement he personally signed and made available to newsmen in Osogbo few days after the letter of his suspension surfaced on Social media.

He claimed that Elder Sunday Akanfe Atidade, who was pronounced to be acting in the chairmanship capacity by the National Working Committee of the party was not the party’s Chairman in the state.

Adagunodo had been swimming in the pool of trouble when his purported suspension was hatched far away in Dubai late last year by some chieftains of the party especially those loyal to Adeleke’s dynasty during the wedding of Adewale, son of Dr. Deji Adeleke.

Even, the stakeholders meeting of the party was disrupted by some aggrieved members at the party secretariat during which some chieftains of the party sustained injuries.

The aggrieved members during the meeting were chanting Adagunodo must go songs.

Ever since the conduct of the 2018 governorship election which saw the party to lose battle of the Government house to the hand of the ruling All Progressives Congress, the party has not been able to settle the perceived rancour among its members.

Adagunodo became a victim of circumstances following a scenario which played out before the primary election of the party and of course he was being accused of disloyalty to the course of Senator Ademola Adeleke during the governorship election in the state.

Despite the pronouncement of his suspension, Hon Adagunodo insisted that he was still in charge just as he appealed to his supporters to remain calm, saying nobody has been officially appointed as the acting Chairman.

Meanwhile, Honourable Atidade in his acceptance speech promised to work towards ensuring that the party become more stronger, promising to carry youths and women along in the scheme of things.

Atidade who described his appointment as the acting Chairman of the party in Osun as a call to move and win together said, “As you are all aware, I am not a man blessed with gallivanting powers of many words. But as leaders of our great party at this critical time, I believe we should practise proactivity at the highest level of it.

“Like I said, there’s no more time to waste. We should be proactive and ready to make effective decisions that will help lead the teeming army of our party members across all layers of party administration and mobilisation into a strong, stable, winning position.

“I urge us all to remain calm at this time and be forward -looking. Being forward-looking as we all know, will engender stability by considering all aspects of our situation, even when there may be many unknowns. We must however faithfully act our burden of the bargain and leave the unknowns to God, the all knowing.

I’m aware of the urgent need to be decisive in breeding confidence. I’m aware our situation is ripe for new decisions that need to be made quickly to help the cause of our party, but we cannot afford to be rash”. Atidade said

“In the course of my experience in this field, I’ve learned and lived the popular notion that leaders only get stronger as they invest time in their teams and help develop other leaders.

Leaders don’t need the credit or the involvement in every decision. We must therefore devise urgent means to stimulate contributory empowerment of our youthful assets we are blessed with in abundance.They are the most potent class of our party and we must work more resourcefully with them.

“Our job as leaders is to stay as close in touch as possible with those closest to the action and this is where our women come in handy. I therefore enjoin our womenfolk to brace up to take the lead in our next line of grassroot mobilisation.

“Yes, I have learned to always take on things I’d never done before. This responsibility to briefly fill the present vacuum in our party is another one. I have learned that growth and comfort do not coexist – growth of our party is a must at this time while comfort can wait for all and sundry to savour together. It is time to work!

But, while speaking, Adagunodo alerted members of the party in the state that he is still the Chairman of the party in Osun State because he has not been issued any official letter from the National Secretariat of the party.

He said: “My dear party members, leaders and the general public, I find it necessary to write you again on my purported stepping aside from the office of PDP State Chairman and state that as at the time of this release I have not received any official letter from the National Headquarters of the Party, I only read it on the social media as you all did.”

Adaguondo stressed further that “also in the

purported letter, it was alleged that some of my colleagues wrote a petition against me, I also want you to know that I am not aware of any such petition. I wish to let you know that I have responded to *the only petition* which I was served with and the fact finding panel that came to investigate the matter found my defense useful.”

Based on the foregoing, I wish to state as follows: “That up till now nobody has been appointed as acting Chairman officially, if any let the person make available the original copy of his letter of appointment upon which he intends to assume office.

“That the PDP members in Osun state are hereby advised to ignore the purported letter in circulation as no official communication from National headquarters had reached me.

“That the Nigerian Security Agencies are hereby placed on notice to act promptly against any forceful attempt to take over the Osun State PDP Secretariat to avoid breakdown of law and order.

That members of the public are also advised to disregard any purported letter asking me to step aside”, Adagunodo said It was gathered that former Governor Olagunsoye Oyinlola who had just returned into the party early this year and some chieftains of the party have done their best to settle fracas and ensure peace return to the party but all their efforts to accomplish this proved abortive.

Consequently, Adagunodo suspension has polarised the party in the state as some of his followers threatened that without Adagunodo there would not be peace just as the other faction believed to be loyalists of the Adeleke also insisted he must go.