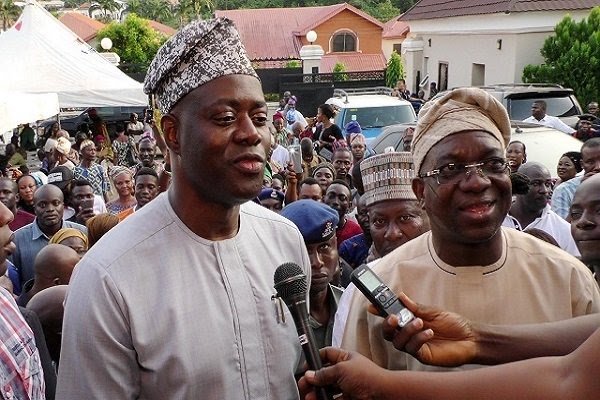 It is no more news that political tension is silently brewing in Oyo state as some people at the corridors of power are home to various interests in and outside the legislature to clandestinely move impeachment at every slightest opportunity.

Recall Mouthpiece NGR had some days ago reported that baring any last-minute changes, plans are underway to impeach the deputy governor of Oyo state, Engr Rauf Olaniyan, on account of trump up allegations after Coronavirus (COVID-19) crisis.

It was learnt that all appears not well between Governor Seyi Makinde and his Deputy, Rauf Olaniyan as recent developments revealed the frosty relationship between the duo and rather than abating; the cold war worsened.

Some people at the corridors of power who are loyal to Governor Makinde were said to be plotting to initiate moves to impeach the deputy governor, who is understood to be desirous of becoming a governor.

According to a source, Olaniyan being a potential governorship candidate with supporters across the local government areas in the state and as a ‘fat cat’, he has the ‘war chest’ to successfully pursue his political ambition, the dissatisfied camp is threatened, thus agreed to boot him out of government.

In a related development, one of the sources and a prominent PDP chieftain in the state also revealed that the camp alleged the deputy governor of making surreptitious moves to impeach the governor, Engr Seyi Makinde.

The source also added that he was also alleged of holding a secret meeting with one of the principal officers in the state House of Assembly, to orchestrate the planning process.

This clandestine move, however, may be connected with the recent outburst at the State House of Assembly where Speaker Ogundoyin sacked Hon. Olagoke Akinajo, who is representing Ibadan North East State Constituency I, as Chairman of House Committee on Public Works and Transport.

The embattled lawmaker, Olagoke at the Tuesday’s plenary, was unceremoniously removed by the Speaker.

The removal, Mouthpiece NGR learnt, was without recourse to the selection committee according to the House of Assembly ground rules.

Ogundoyin and Akinajo are both from the same political party, the Peoples Democratic Party.

A source who spoke on confidence revealed that the Speaker and some other members in the House are not in good terms, adding that the frosty relationship between Governor Makinde and his deputy might have led to the unceremonious activity at the state House of Assembly on Tuesday.

The source added that some political gladiators are plotting to remove the Speaker until former Governor Rashidi Ladoja intervened from abroad.

Another source also alleged that the Deputy Speaker, Hon. Abiodun Mohammed Fadeyi who is enjoying support from the state governor, Engr. Seyi Makinde is also eyeing the seat.

In the wake of the development, a trusted news agency, The Nation, has finally confirmed the authenticity of our recent publication surrounding Governor Makinde and his deputy over impeachment saga.

The Nation reports, “Despite the intensity of the plot to remove the Deputy Governor of Oyo State, Engr. Rauf Olaniyan, it appears a Herculean task because most members of the state House of Assembly are with the Deputy Governor than Governor Seyi Makinde (GSM).”

“Early in the life of the administration, the lawmakers have had the ears and support of Olaniyan than the governor, including standing by some of them when in need. The legislators are angry that the governor has been allegedly contemptuous of them.”

“When the lawmakers were hauled into a hotel by a top member of the Governor’s Advisory Council (GAC) to sell the idea of a likely impeachment of the Deputy Governor, most of them were busy with text and WhatsApp messages (on the spot), leaking reports on how the plot will be hatched. Olaniyan’s strategists were enjoying the game. It is obvious that any impeachment investment will go down the drain.”

“Notwithstanding, two confidants of the governor from Itesiwaju and Saki West are locked in a fierce battle to produce the successor to Olaniyan.”