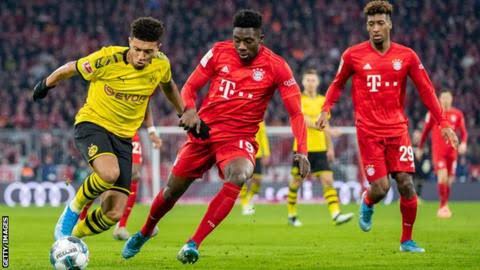 Bundesliga Football Season is set to resume back this month as Germany is showing a strong relive from Coronavirus pandemic.

This was confirmed on Thursday by Chancellor Angela Merkel.

The Bundesliga will return on May 15 amid the COVID-19 and the German Football Association (DFL) hope to complete the season by June 30.

It will become the first major league in Europe to return to competition, and clubs have been told by the German Football League (DFL) that it wants to restart on 15 May.

Mouthpiece NGR gathered that all games will be played behind closed doors amid a ban on mass gatherings in Germany until Aug. 31

Germany’s government on Wednesday gave the green light for the Bundesliga to return and left the decision of the return date to the DFL.

Recall that the Bundesliga was suspended on the eve of matchday 26 on March 13 and the DFL agreed to continue with the standard calendar.

Among the matches to be played when Bundesliga returns on May 16 will be the Revierderby between Borussia Dortmund and FC Schalke 04, with the two sets of fans having a long-standing rivalry.

Bayern Munich will be a way to Union Berlin and the Klassiker between Dortmund and Bayern is set to be played on May 26 or 27. Germany’s record champions are vying for an eighth consecutive title and hold a four-point lead over Borussia Dortmund.