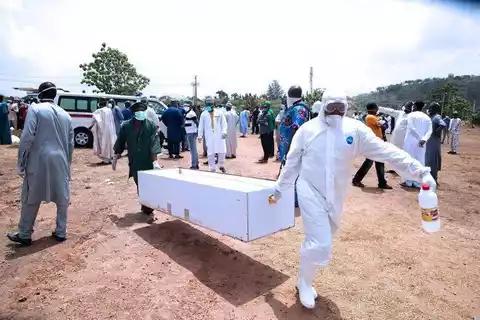 Kemi through her twitter handle expressed concerns that the corpse laid to rest on Saturday could be that of one Dauda, an inner aide of the late Abba Kyari.
“Nigerians pls STOP sending me the same footage of a man removing a hazmat suit outside a cemetery I’m a trained Investigative Journalist. Already told you Mr Kyari was flown to Lagos, died in Ikoyi, cremated. No INFECTED body was moved to Abuja. He’s from Borno.,” she said.

Correction: He’s from Maiduguri side. Dauda his Aide is from Daura. I’m concerned if that was Dauda they buried. He infected most of the Daura cluster and was flown back to Abuja for Quarantine. We never heard from him again. 11 people he had contact with died of flu symptoms,” Kemi tweeted.
Mouthpiece NGR confirmed the internet went into frenzy on Saturday shortly after series of tweet from Kemi Olunloyo surrounding the corpse of Abba Kyari.

Mixed reactions continue to trail on social media. The question that keeps pumping is that Islam doesn’t keep dead body till sunset let alone keeping it for few weeks before burial.
There are reactions from commentators whether the remains of a whole mallam will be made to break Islamic law or whether kemi Olunloyo word was a mere coincidence. Or probably the statement of Nnamdi Kanu saying— he was buried in Cuba was a mere fallacy?
The burial of the former Chief of Staff took place yesterday under heavy crowd but the most surprising part is that only two people were able to carry a corpse that is meant for four people on a normal day.

Should we rather conclude that the burial is an arrangee or say the infected disease on Abba Kyari has completely reduced his weight ?
Kindly drop your comment…..