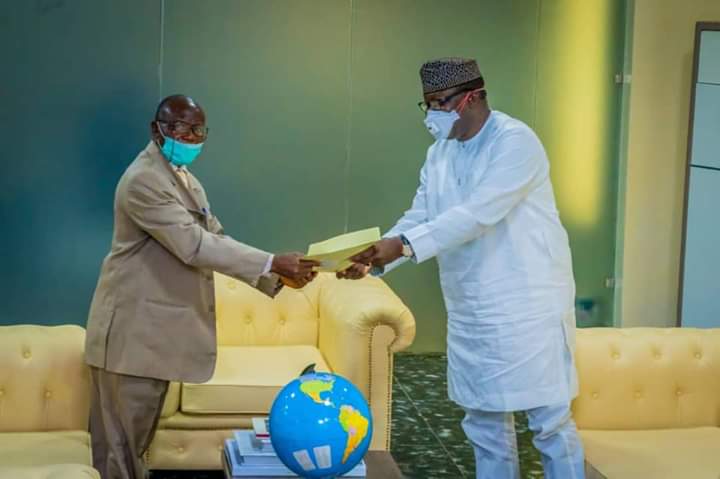 Adeoye, in a trending video publicly reprimanded his son who travelled to Lagos despite his warning not to embark on the trip.

The video of Mr Adeoye refusing to cover up for his son over fear of contracting and spreading COVID-19 in Ekiti State went viral after it was shot days ago.

Adeoye said in the video that he would not take the young man home because his house had no space where his son could isolate for 14days despite not showing any symptoms.

He urged the authorities to take charge and keep his son under close observation.

However, Mr Fayemi met Adeoye on Thursday and commended him for the action as the state battles to contain the ravaging disease.

A Twitter thread by the government read: “Governor Kayode Fayemi @kfayemi has appointed Mr. Adeoye as a COVID-19 Response Ambassador in Ekiti State. He will help to propagate the message as a member of the COVID-19 Task Force @Ekiti_COVID19 in the State.

“By, in accordance with existing regulations, denying his son entry into his household having travelled from places under Federal lockdown against his fatherly advice, Mr. Adeoye has proved to be a worthy ambassador of Ekiti State resolve to end the #COVID19 pandemic.

“The Government and the good people of Ekiti State are very proud of this chivalrous act of courage and principle which are the hallmarks of the Ekiti person.

“Mr. Adeoye represents the kind of self-discipline, selflessness, and sense of collective responsibility that Ekiti State and Nigeria need desperately today to progress.

“Ekiti State will in future recognise Mr. Adeoye’s valour as an example of the rebirth of Ekiti Values Orientation which is the central focus of Governor Kayode Fayemi’s @kfayemi administration.”

Meanwhile, the Ekiti State Government on Wednesday ordered the suspension of a security officer who recorded the video.

The security officer, while recording the video, made fun of Adeoye, urging him to go home with his son, after he claimed the young man had been tested and certified free of COVID-19.

The officer was suspended for “incompetence and highhandedness” as the man’s temperature was only checked with a thermometer.