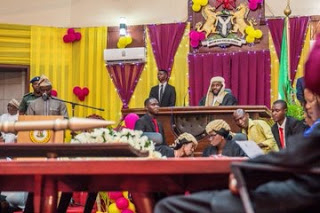 Oyo state House of Assembly has agreed to a 30 per cent slash in their monthly allocation effective this month due to drop in oil price, federal revenue and COVID-19 restrictions.
The agreement was reached when Governor Seyi Makinde met with the state’s lawmakers at government house, at the weekend, Nigerian Tribune reports.
At the meeting, Governor Makinde explained that the pandemic had resulted in about 60 per cent drop in the federal allocation and it is taking toll on the state’s economy.
Chairman, Oyo House Committee on Information and Media, Honorable Kazeem Olayanju said the lawmakers agreed to the slash in the interest of the smooth running of the state.
“Our income has been slashed by 30 per cent as our support towards COVID-19. The governor brought the idea and we agreed that effective this month, there should be the 30 per cent deduction.
“We were made to understand that the pandemic had greatly affected the economy of the country and the state as well as that the Federal Government has reduced allocation by 60 per cent.
“This situation could have affected regular payment of salary of Oyo State civil servants but the governor maintained that irrespective the economic situation of Oyo state, the salary of civil servants must not be affected. Hence, we agreed that political office holders should make sacrifices,” Olayanju said.(Tribune)