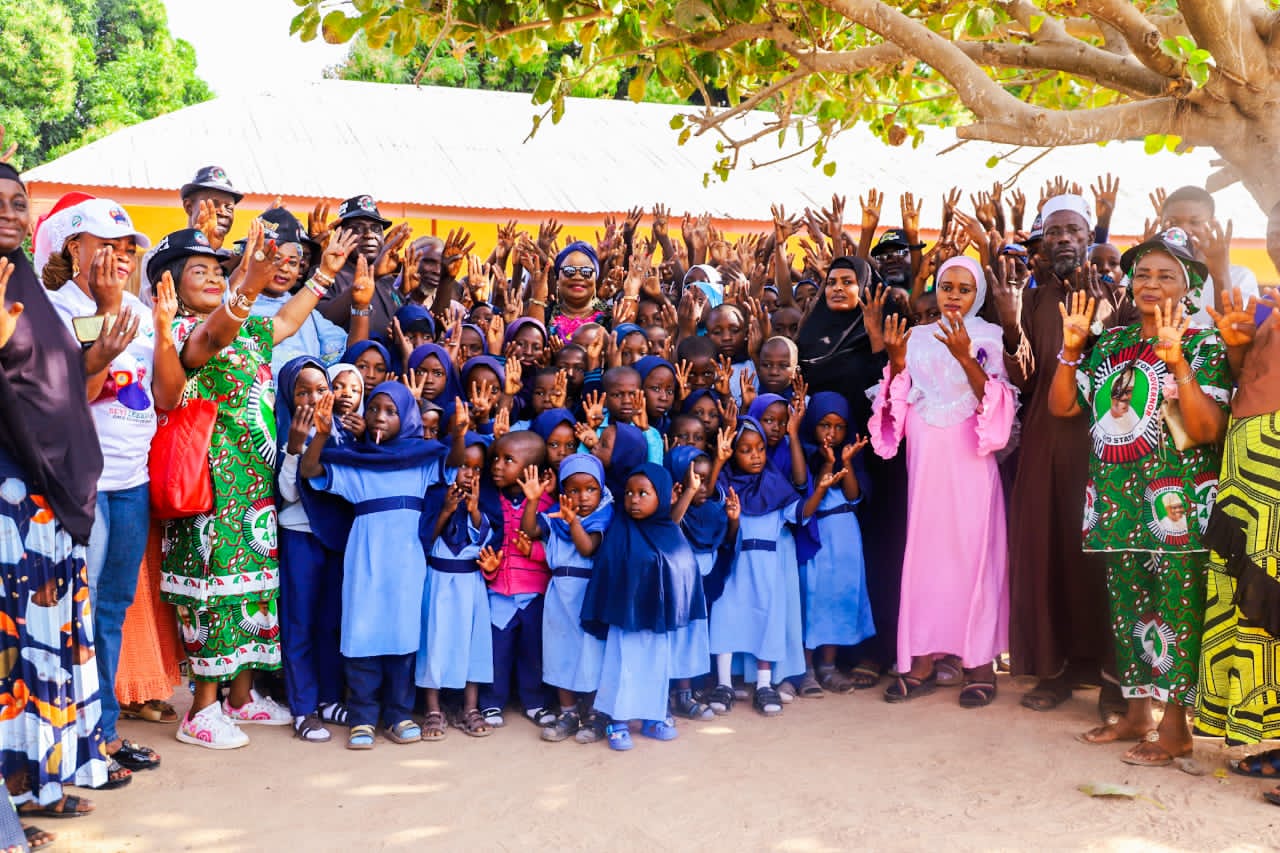 The wife of the deputy governor of Oyo, Chief (Mrs) Ajibola Lawal, has donated money and school materials to the NANA As’ MAU Orphanage Group of Schools at Maare Road, Oke- Sunnah, as part of her social responsibilities and in an effort to put smiles on the faces of less privileged.

The Yeye Baamofin of Kishiland, who made the donation on Monday, was seen so excited as she shook hands with the almost 210 children in the close-knit Nursery and Primary schools before looking over other students in the secondary school blocks.

“Greetings to you all,” she said as she arrived. You will all excel by Allahs grace. I am glad to see you. And as such, I want you to face your studies. You are looking good. I can see leaders of tomorrow among you. I can see Governors, lawyers, doctors, nurses, deputy governor’s wife, governors wife and successful traders and I pray that you will all be successful.”

Lawal, who was so excited moment she learned that one of the students currently preparing for WAEC would want to be a lawyer, which is the profession of her husband, also commended him and other students who want to study mass communication, medicine, among others.

Speaking, a member of the staff simply identified as Mr. Yusuf revealed that about 500 children make up the population of the school, adding that the students are being taken to other schools for external exams registration particularly Iba High school, Kishi.

During the visit, another staff, Mr. Abubakar, also spoke with our correspondent and pleaded with governor Makinde to give the school and student activities the proper attention.

He also solicited for hostels for the students and means of transportation to aide the movement of staff and students.

The distribution of school bags, exercise books, clothes, and other items was the highlight of the occasion, making the children and staff so happy that they waved the 4+4 slogan in the air.

“Like I said, the pupils are leaders of tomorrow as I have prayed for them,” the Yeye Baamofin remarked in front of the staff and students.

“I had no idea that Kishi had a school of this kind, but I found out through someone. Given that I undertake the majority of my frequent activities in Ibadan, if I had known, I would have been visiting here for donation long ago.

Lawal urged the people to mobilize in support of Governor Seyi Makinde and added that the gesture was made in support of Makinde’s led administration.

She also hinted that the governor would be visiting the town for Omituntun 2.0 to enhance further development of the community.

On her part, a female staff of the school, further thanked the wife of the deputy governor for her donations and thoughtfulness. She appealed to her to assist them in ensuring that facilities such as computers are also put in place.

Lawal quickly responded, however, by stating that this is just a tip of an iceberg, adding that the staff and students should expect more attention towards the development of the school.

Another staff thanked the Yeye Bamofin of Kishiland for thinking of the orphanage, as well as her recent’s efforts in paying for the WAEC fees of SS3 students who are currently preparing for external exams.

He prayed Allah to continue to guide them and also pray that Governor Seyi Makinde will be victorious in the forthcoming 2023 general election.

The Senior staff of the school also extended their warmth appreciation as well as commended the efforts and commitment of the governor towards the prompt payment of salaries and taking good care of retirees, among others.