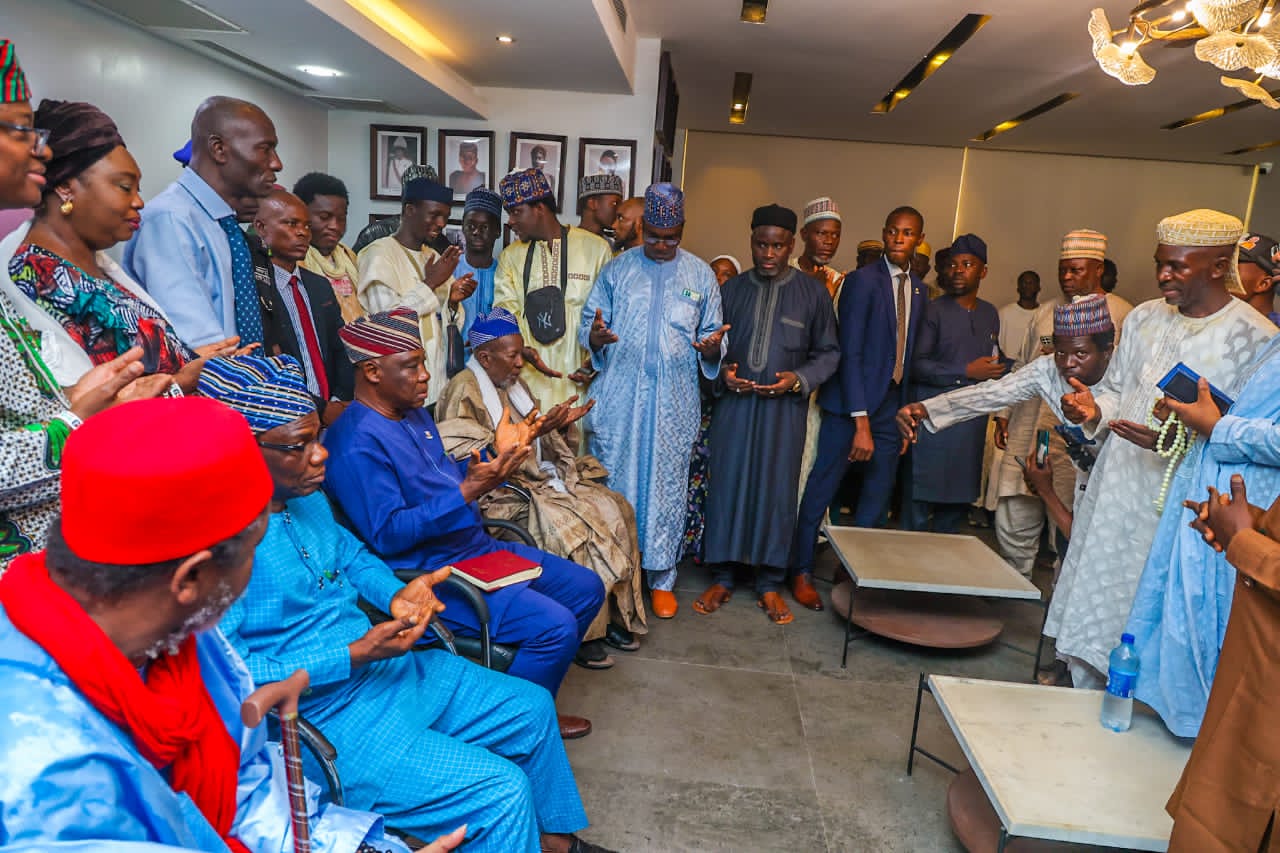 About 500 members of the Tijaniya, led by Khalifa Mohammed Mayi Ibrahim Niyas, RTA, the son of Maolana Sheikh Alhaji Ibrahim Niyas, were received by the deputy governor of Oyo state, Barrister Abdul-raheem Adebayo Lawal at the reception of governor’s office on Monday.

MOUTHPIECE NGR reports that the group, who had come to pay a courtesy call on the Executive Governor of Oyo State, ‘Seyi Makinde’, also offered their prayers for the governor who is seeking a re-election in the forthcoming 2023 general elections.

The Kahleefah, Mayi Ibrahim, who spoke in Wolof and was translated into English, said that he had heard positive things about the current administration and prayed for the governor’s reelection while wishing him well in all of his activities.

He expressed his deep love and appreciation for the deputy governor’s selflessness in offering to drive him back to the Alakia airport, and he prayed that Allah would hear his prayers.

He also thanked Lawal for the warm receptions he gave him at the office.

Excited by their arrival, the governor’s deputy Bayo Lawal greeted them for their courtesies and wished the son of Ibrahim Niyas a safe return to Senegal.

The group were led to the secretariat by the Turaki Adini of Oyo State, Engr Abduljelyl Adekunle Karheem Mogaji Adanla who is also the Special Adviser on Political Matters to His Eminence Sheikh Muh’d Salis Alao Adenekan (R.T.A), the Grand Caliph of Faedot Tijaniyah for Yorubaland, Edo, and Delta States of Nigeria.

Sheikh Ibrahim Tijani, who was born in 1900 in the village of Tayba Ñaseen between the Senegalese city of Kaolack and the border of Gambia, was a major leader of the Tijani Sufi order of Islam in West Africa.

His followers in the Senegambia region affectionately refer to him in Wolof as Baay or “father.” He is the founder of the Ibrahimiyyah branch of the Tijani order, whose adherents designate themselves in Arabic as the people of the Faydah Tijaniyyah (Tijani Flood) or, in Wolof, as Taalibé Baay (disciples of Baay).

Outsiders often refer to his disciples as Ñaseen, which in Wolof means “of or pertaining to the Ñas family,” although his disciples do not generally use this designation. Baye Niass(Sheik Ibrahim Niass) is estimated to have about 250-300million followers today.

There are records of testimonies and display of divine wisdom credited to the cleric, while he was alive and even in death. Some of his followers believe the call of his name awakens his spirit and therefore, the psyche, Niasse is usually pronounced after his name is called anywhere and anytime.

All of his children are said to carry on his spiritual power, which has inspired many of their followers to gather around them in an effort to receive spiritual blessings from them.