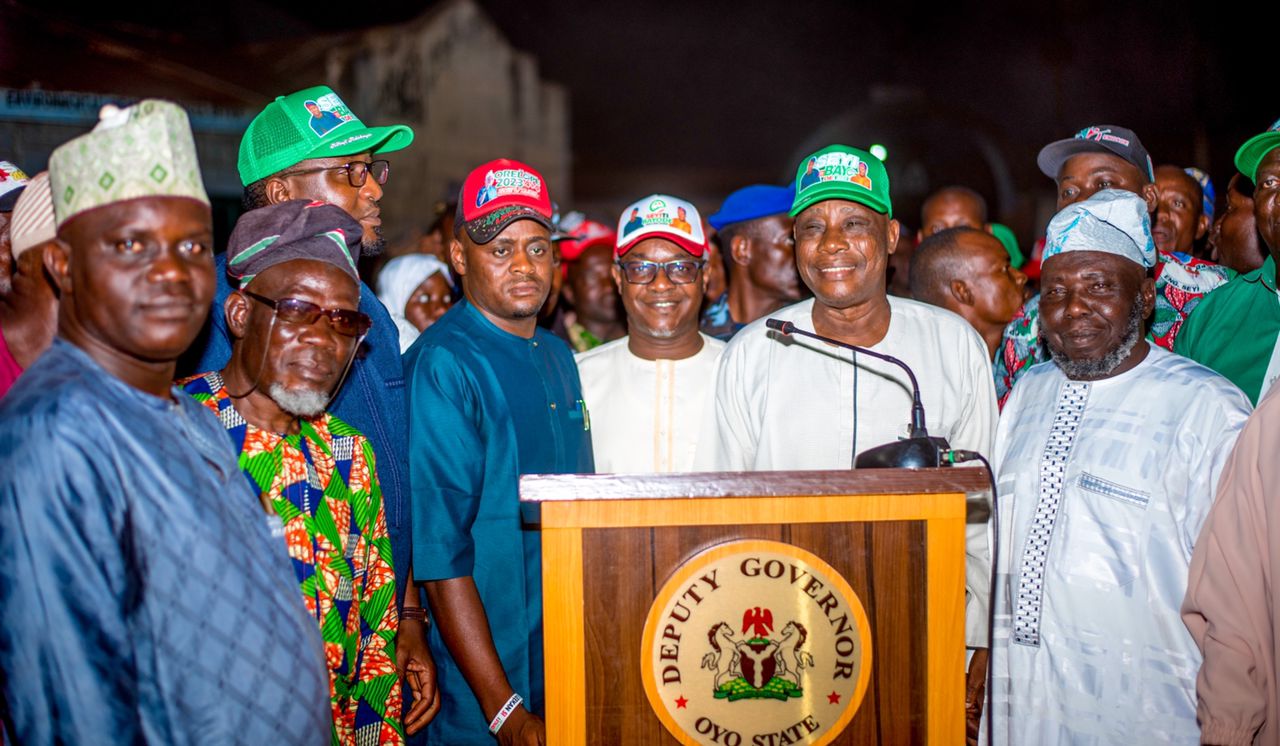 ….as Bayo Lawal urges others on sabbatical to return home

The battle for the soul of Oyo state has continued to gather momentum as thousands of members of All Progressives Congress (APC), including well known party figures, defected to Peoples Democratic Party (PDP) on Saturday in Irepo local government.

Another group of defectors from the late Honorable Ojo group, led by Hon. Timothy Owoade and Mr. Ojo, with many supporters also from the All Progressives Congress, were also present at the event.

MOUTHPIECE NGR reports that following the appointment of the current deputy governor of Oyo State, Barr. Abdul-Raheem Adebayo Lawal, the Oyo State chapter of the All Progressives Congress has suffered a significant setback as leaders from all parties in Oke-ogun and throughout Oyo State have expressed interest in supporting Makinde’s reelection in the general election of 2023.

Receiving the defectors at Iba Palace, Ojude Oba, the PDP state assistant auditor, Hon. Lawal Muhammed Abdullahi who announced the name of the defectors also revealed that more than 5,000 members of the All Progressives Congress had defected to the Peoples Democratic Party (PDP) from the 10 wards.

J.S. Amodu, one of the defectors, who officially announced his defection stressed that he was not just joining the Peoples Democratic Party but returning back to his party.

He claimed that during his time in school, their lecturers used to take sabbatical leaves and still be working elsewhere, adding that he only took sabbatical and he is now back to his original party.

Amodu praised Governor Seyi Makinde for giving Kishi the chance to have a deputy governor from Oke-ogun, emphasizing that the slot is not just anyhow ‘Deputy Governor’ but a Super Deputy Governor.

In order to show their appreciation for the Governor with the opportunity that had been given to them, he urged the residents of Kishi to make the most of the opportunity by making sure that they mobilize strongly for the party in the upcoming 2023 general election.

He further disclosed that his return to the party is due to the appointment of Barrister Bayo Lawal and that there are numerous prospects that the deputy governor would bring forth to develop their town.

However, a party chieftain from Oorelope LG, Chief Jacob Adetoro, who expressed joy over the return of Hon. Amodu, a former party leader and the ex- chairman of the Irepo local government, claimed that Amodu’s return has come to add value to the ruling party in the state.

Speaking, the Deputy Governor, Bayo Lawal, who was in company of his stunning wife, Chief (Mrs) Ajibola Lawal, commended the decampees and singled out one of the leading defectors, Amodu, calling him a very humble man who holds him in high regard.

He disclosed that he had to take permission from the Governor to return home because Amodu had made up his mind to join PDP.

“In Igbeti, some members of the All Progressives Congress have also joined the Peoples Democratic Party, and I am confident and upbeat that our party, the PDP, has already won the forthcoming election.

“I am urging other party members who are still on sabbatical to return to the party and also follow the bold step taken by J.S. Amodu and other defectors”

He urged other party members to embrace Amodu and other defectors with complete joy while describing Amodu as a National politician with a solid connection to the grassroots and that whatever slots he deserves should be given to him.

He said, “There are 4 Federal Constituencies in Oke ogun, but the Governor opted to appoint his Deputy from Irepo, therefore there would be plenty of opportunities for us to campaign in the election.

“The PDP is still the only powerful party to defend the interests of the people, thus I urge our members to persuade those who are still in the Third Force Party to join as well.

Lawal emphasized that there is nothing that can be accomplished with a third party because he has repeatedly run for office on that platform without success, and the PDP is still the only viable option.

He also stated that those who have said they will cast the wrong vote will be monitored so as to make sure they do what will promote the growth of the Kishi town.

He then urged Baba Adetoro and other party stakeholders to keep an eye on every vote in every polling unit while appreciating everyone for the chance given to the defectors.

Lawal assured that Governor Makinde would oversee local government reconciliation in areas where there were problems.