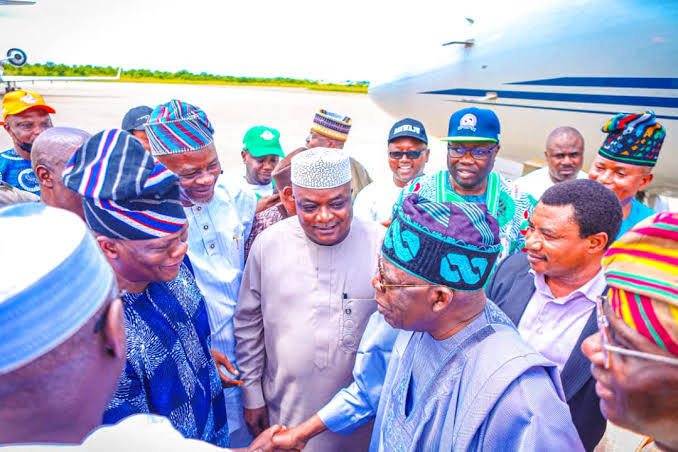 The ruling People’s Democratic Party (PDP) in Oyo State has described as laughable and pathetic the reaction of the state chapter of the All Progressives Congress (APC) to the purported endorsement of the presidential candidate of the All Progressives Congress (APC), Asuwaju Bola Ahmed Tinubu, for the forthcoming 2023 election by the governor of Oyo State, Engineer ‘ Seyi Makinde.

The Oyo State PDP said that the APC has further shown the world its pitiable condition as far as the  current political realities are concerned.

By celebrating the purported endorsement, which amounts to a fluke, the APC has shown itself as fickle- minded analysts, whose thinking is far removed from state and national realities.

The ruling party in the state maintained that APC in Oyo state has moved from a party suffering from incurable perpetual hallucination to that of a political party gasping for breathe having seen the open and public resentment and rejection it is currently facing from all parts of the country.

Oyo State PDP in a press statement on Wednesday November 3, by its Publicity Secretary, Akeem Olatunji, made available to newsmen stated that “APC should rather be pitied for failing to achieve any notable success in its very primary duty as a government at the centre,” wondering how any Nigerian would vote for a continuation of an APC regime in the face of obvious realities.

According to the ruling party in Oyo state, APC had continued to delude its members in the state about how Makinde was not popular and how its governorship candidate would dislodge the governor come 2023 but could not hold back its excitement and wild jubilation at the purported endorsement story making the rounds in some section of the media.

“To state it exactly as it is, what the statement by the Deputy Governor, Barr Bayo Lawal, who was in Akure at the weekend to represent the governor means is that Asiwaju ni wa in Oyo State as Oyo state anthem clearly indicates. Do we have to change the anthem because Asiwaju Tinubu is contesting? “H.E. Barr Bayo Lawal only echoed an anthem that reiterates Oyo State as the pacesetter and political headquarters of South West Nigeria.

“The governor who is not only leader of the PDP in Oyo state but also the entire South West, did not at any fora endorse the candidature of Bola Ahmed Tinubu who is running on the platform of the opposition party against the PDP candidate.

What happened is that Senator Oloye Teslim Kolawole Folarin and his hallucinating APC members tried to misrepresent the information by the deputy governor.

This is the true state of things and we made bold to reiterate that Oyo State and the PDP will not do anything politically that undermines the interest of the state and her people.

“We as the ruling party in Oyo State will continue to place Oyo state first as clearly demonstrated by our overall leader and face of our great party in the State, Governor Seyi Makinde, before any other interests and we urge our noisy neighbors in the APC and their arrowhead, Senator Folarin to refrain from the self inflicted psychological pain of thinking Governor Makinde or the PDP will have anything to do with his party either directly or indirectly.

“Alhaji Atiku Abubakar is our presidential candidate and there is no ambiguity in that, PDP in Oyo State is firmly under the leadership of our pathfinder and God sent man, Governor Seyi Makinde, under whose political leadership a PDP president will emerge come 2023.

“We understand that there’s a grand plan by the APC having seen the national rejection by the Nigerian people after a woeful performance in the last almost eight years at the helms of affairs and will stop at nothing to push down lies and false narratives to suit its agenda but they’re failing to come to terms with the fact that the people are now more than ever before politically conscious and awaken.

“How laughable and pathetic it is to see Senator Teslim Folarin and his co-travelers on their final journey to political perdition jubilating at the mere purported endorsement story. That validates our position that there’s no vacancy at the Agodi Government House come 2023 and President Muhammadu Buhari will successfully hand over power to Alhaji Atiku Abubakar.

“Even Senator Bola Tinubu himself knows this fact deep down his heart and subconscious, that Atiku is the nation’s incoming president to succeed President Buhari and that is the more reason for Oyo APC’s  desperation.

“We urge our people to ignore and discountenance the misinformation being peddled around by the Folarin and his APC as false propaganda which has been their hallmark since the creation of the party. Little wonder that the same APC government which recently bestowed on President Goodluck Jonathan, an award of excellence in public service is the same party which rode to power on the strength of false propaganda, mischiefs, and malicious campaign against the same man being so honoured.