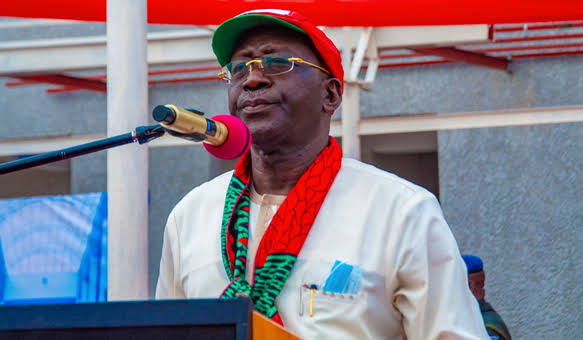 PDP Chieftain, Dare Adeleke has said the embattled national chairman of the party, Senator Iyorchia Ayu has no authority under the constitution to stop any candidate from running for office.

Adeleke who was reacting to Ayu’s statement that he had the power to stop Governor Ortom’s ambition to the Senate as well as other candidates with his signature, said Ayu has ascended into megalomanic, delusional day dreams.

In a telephone conversation with our reporter, Ahmed Adedeji, Adeleke who is also Executive Chairman, Oyo Pacesetters Transport Company, said: “I dare Ayu to try such a move. He has become a narcissistic autocrat who now indulges in hallucinatory images of false gradeur from a post that he should not be occupying.” He said.

“Ayu does not have any right under the party’s constitution to stop any candidate with a mere signature as he boasted like an over indulged glutton in Benue State.” Adeleke continued.

“It would seem that the northern dominance is truly the agenda, going by these hubristic utterances from someone who should be forging unity in the party, especially with the general elections so close’.

“What we are demanding is, justice, equity and fairness, the presidential candidate and the national chairman cannot hail from the same zone and we remain consistent in our demand that, Ayu Must Go.”