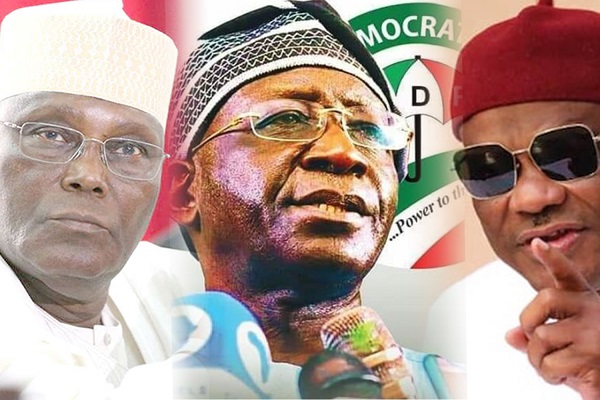 Board of Trustees (BoT) is mounting pressure on the national chairman, Dr. Iyorchia Ayu, to resign as a condition for reconciliation with the aggrieved governors, it was learnt yesterday.

Barring last minutes change of mind, the advisory body may ask him to quit for a candidate from the South.

The BOT members will also meet with Rivers State Governor Nyesom Wike and his group tomorrow in Port-Harcourt, the state capital, to deliberate on options for resolving the crisis of confidence in the party.

There was pressure on Wike last night not to shun the BoT delegation.

But it was not clear whether or not the presidential candidate Atiku Abubakar, and Ayu will accept the BoT’s advice.

The BoT members, however, have been locked in a series of meetings since the weekend to consult with key party leaders, including Atiku’s running mate, Delta State Governor Ifeanyi Okowa.

Also, sources said Ayu was planning an emergency meeting of the National Executive Committee (NEC) to discuss the decision of some members to return the money paid into their bank accounts by the party in controversial circumstances.

Sources said the decision to ask Ayu to step aside was arrived at when some influential BoT members met in Abuja last Friday.

It was gathered that the affected leaders concluded that the party’s chances in the 2023 presidential poll could be jeopardised if the protracted crisis was not resolved.

Some BoT members warned against ignoring five of 11 PDP governors.

They reasoned that the boycott of Atiku’s campaign launch was foreboding of danger.

It was also learnt that some party leaders were worried about the implications of PDP being out of the government for another four or eight years.

The leaders were faced with two difficult choices: returning to power by sacrificing Ayu or retaining the PDP national chairman to lose the presidential poll.

According to a source at the meeting, although some BoT members asked the party not to succumb to indiscipline by Wike and five others, the session was devoted to how to navigate through the crisis.

The source said: “We were at a crossroads. We knew Wike and others have been contemptuous of our candidate and undermining PDP’s chances, but we need them to win the presidency.

“Our greatest headache is losing the support of five out of 11 PDP governors because we want to retain Ayu.

“The mess over the housing allowance paid to the members of the NWC has created a reputation challenge for the party.

“We resolved to advise Ayu to put the interest of the party above his own by resigning or stepping aside. It is a great sacrifice, but he will remain a hero.

“Some leaders are even suggesting that Ayu can be compensated with the office of the Secretary to the Government of the Federation if Atiku wins.

“The way we are now, Ayu is the issue in the party and we must address the challenge around him squarely. He has to leave the office for a candidate from the South.”

Another BoT member said: “At our meeting, we made up our minds to go the whole hog to appease Wike and other governors who are aggrieved and other leaders.

“We will send our advisory to all the organs of the party to consider the recommendation dispassionately.

“It is left to these constitutional organs to accept or reject our advisory.”

Another member of the body said: “We have agreed to meet Wike on Tuesday in Port Harcourt to discuss the options we have recommended for peace to reign

“One of the terms for peace is the total commitment to the campaign of our presidential candidate, Atiku Abubakar.

“We have sent an intermediary to Wike not to shun the BoT team coming to Port Harcourt. So far, he has given us his words.”