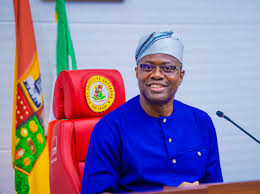 Oyo State Governor, ‘Seyi Makinde, on Friday, maintained that the state government is delighted with the prospects and potential of the African Development Bank’s special agro-processing zone project sited in the state.

The governor, who made this statement while receiving a team of the AfDB at the Governor’s Office, Secretariat, Agodi, Ibadan, noted that the state is already moving in the direction of agro-processing in line with its agenda to expand the state’s economy through agribusiness.

A statement by the Chief Press Secretary to the governor, Mr. Taiwo Adisa, quoted the governor as stating that the state is already witnessing a boom in the cassava value chain and that the prospect of the special agro-processing zone project is exciting.

He said: “I want to use this opportunity to welcome one of our own, Professor Banji Oyelaran-Oyeyinka, back to Oyo State.

“The special agro-processing zone is very exciting to us here, and I am happy to let you know that we are already moving as a state as well.

“Few weeks back, we commissioned the second largest sorbitol plant in the world, owned by Psaltery International. That is one step further down in the cassava value chain, from cassava to fructose and then to Sorbitol.

“If you go to the neighbourhood of the plant in Ado-Awaye now, it is cassava all the way. In fact, once you get to Iseyin and move further, you will just see trucks carrying cassava all over the place and few of the things they have asked us for, we are pushing.

“So, we are excited about the prospect of this project.”

Earlier, the team led by the Special Adviser on Industrialisation to the AfDB president, Prof. Oyelaran-Oyeyinka, stated that the process towards the building of the special agro-processing zone has been long, with Oyo State being one of the eight zones.

He expressed joy at being able to bring the project, which he said would be commissioned on October 24 and October 25, to fruition.

Oyelaran-Oyeyinka equally commended the Oyo State government for the support it gave the AfDB on the project, describing the governor as “an indefatigable champion of the project.”

He noted that apart from possessing the requirements to get into the programme, the state also had the best environmental laws and was one of only two states to have signed off with the Federal Government on the subsidiary loan agreement.

He said: “We have done quite a lot and it has been a long process. Oyo State has been one of the eight zones. By the way, we are in eighteen countries now, and I can tell you that the money budgeted for each of the zones is more than that of any other country. “And we have eight of such in Nigeria. So, it is for me a privilege to ensure that we bring it to fruition.

“I came here for us to make sure that the launching, which we have fixed for October 24th and 25th. Thank you so much for the support you have given us, as you have been an indefatigable champion of this project. As a matter of fact, when we first started, people were surprised we started from Oyo State.

“We have a criteria, which has about eight requirements. And for you to get into the programme, you have to show that you have the requirements including the environmental report, visibility report, among others.

“At those initial phases, Oyo State had the best environmental laws, and even in terms of the subsidiary loan agreement, you have been one of the only two that signed off with the Federal Government.

“We had planned to do the high-level launching in March but some delays came up. Now, it is October 24th and the President will chair the meeting. All the governors and ministers are expected at the event. All the Presidents of the partners of this project – AfDB, IFA have all committed to be at this meeting.

“Sir, the model of this project is that while this loan, which is a very cheap one from the AfDB, the state is getting $7m, which is about N9.1b. It is a catalytic funding. Our own goal is to get other anchor investors who would bring equity. We don’t want states to be saddled with projects, loans, debts and all of that.

“I must also say that the Project Implementation Units are being set up and we have provided some money to run that office as they will do oversight and all of that, but the construction and management of the schools must be sustainably managed by the private sector working with us.”