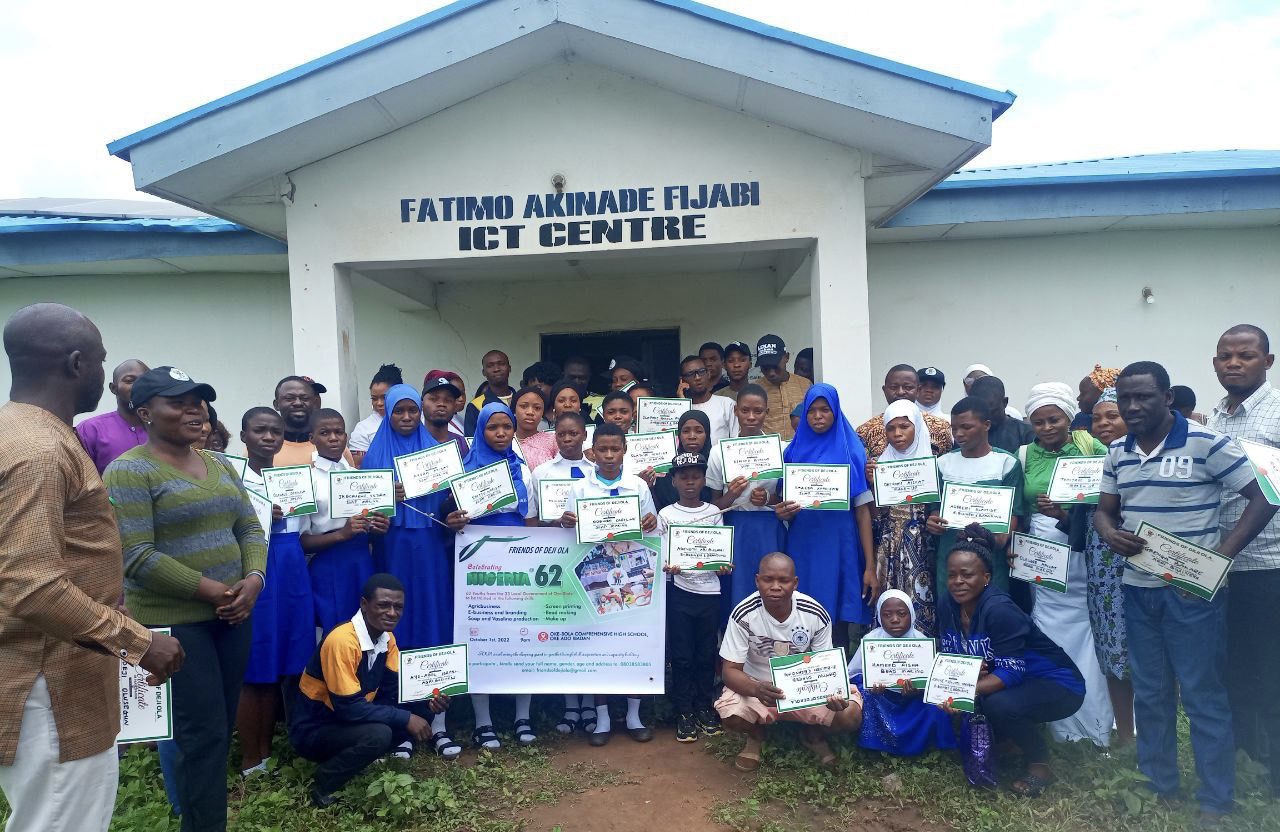 Over 150 young people have been trained in digital marketing, branding, agribusiness, soap and bead making, makeup business, and others by Friends of Deji Ola, a registered non-governmental organization.

The 62nd Independent celebration, which was originally intended for 62 trainees, was later expanded due to an increase in registrations.

In his remarks to the recipients, the convener, Mr. Deji Ola, who serves as the personal assistant to Otunba Segun Ogunwuyi, the chief of staff for governor Seyi Makinde, explained that the group had originally intended to train only 62 youths from each of the 33 local government areas in Oyo state in order to celebrate Nigeria’s 62 years of independence in style, but that the need to increase the cap emerged during the application screening process.

He said the NGO has no other option other than to accommodate more people especially those who have great passion for winning.

Ola, who reiterated that his friends are always poised towards any initiative aimed at touching lives of common citizens on the street of Oyo and Nigeria at large, explained that they are doing this with the little resources within their disposal.

“In the last 3 years, we have impacted many lives through our special initiates like; random act of kindness, clothe the needy, one book one pen, free tutorial, food bank, capacity building, environmental awareness and sanitation amongst others” he asserted.

Highlight of the event was the special consideration given to special needs individuals and a trained interpreter who also volunteered to translate the entire process to those who have one or other challenges with their speech or hearing.

He, however, appreciated the Executive Governor of Oyo State, His Excellency, Governor Seyi Makinde, FNSE, for creating enabling environment, which has indeed helped many people to identify their strength while channeling same to the growth and development of pacesetter state.

Miss Olaitan Zainab, during her remarks on behalf of all beneficiaries, appreciated the group for organizing such epoch-making event.

She explained that, last year independence holiday was a waste for her as she did not achieve any tangible thing, saying there is a difference this year.

“But this year, I am very happy and bold enough to say that, Ican prepare liquid soap without any hitch,” She said.

Some of the volunteers who actively participated in the event emphasized their readiness to always make positive impacts as captured on their slogan.

They noted that the need for capacity building and skill acquisition can never be overemphasized as it’s one of many existing strategies, which will not only eradicate unemployment but also reduce crime rate in the society.