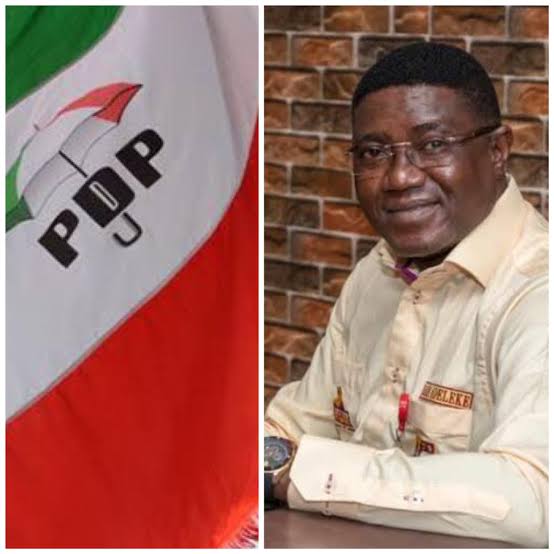 PDP chieftain, Dare Adeleke has said the South West Zonal Secretary of the party, Rahman Owokoniran has committed an ignoble act by bonding with those going against the wish of the party in the ‘Ayu Must Go’ cry out.

Adeleke who spoke with our reporter said he was not surprised that “some characters are forming a band of renegades to go against the collective desire of the south against injustice”.

The Oyo Pacesetter boss was reacting to a communique released by a group which calls itself the Atiku People United (APU), under the Chairmanship of Chief Dapo Sarunmi.

In the communique reportedly released to journalists via email, the group said calls for the resignation of the PDP National Chairman, Iyorchia Ayu, are ill timed and potentially destructive, unhealthy and could harm the party’s potentials in the next election.

Adeleke noted: “The South continues to be relegated in the scheme of things on the national level because there are always willing traitors and backstabbers who sell their birthright for a morsel of bread.”

“This call for Ayu to resign is not driven by hate for him and it is neither the individual wishes of Nyesom Wike, Seyi Makinde or any other single person. It is the decision of the whole of the south that we must respect the culture of rotation that exists in our party. A transion of equity which has kept us formidable in the past two decades.” Adeleke said.

He also pointed out; “The call is not selfish, neither it is targeted at our presidential flagbearer and until equity is wvenly distributed, with Ayu’s resignation, we will continue to protest the grave iniquity being peoetrated against the entire south.”

Stressing further, Adeleke maintained that both the presidential flagbearer and the chairman of the party cannot come from the north. “It is not a Wike or a Makinde tango, it is the wish of members as stipulated by section 7(3)(c) of our constitution. It is disappointing and highly preposterous that a man, founding member of the party like Dapo Sarunmi is supporting this grave anomaly and moralising with tales by moonlight and empty verbosity. You cannot scorn the whole people of the south and expect everybody to lap it up. We will not, just as the north does, we will fight for our right. Ayu himself knows the pact which he signed to resign if the flagbearer emerged from the north, now, why are they taking over 18m members for granted? Nobody can wish us away, I assure you that’.

On the fact that the South West Zonal Secretary, Rahman Owokoniran is a member of the APU, Adeleke said:

“His decision to join the turncoats is indeed pathetic and trust me, he will be penalized because the South West is a determined partner in this cause.”

“Reexamining the whole affair of this sinister group, APU, Chief Dapo Sarumi is Currently abroad on his medical vacation.  I’m of opinion that this slippery Owokoniran is on his usual no-good pranks using the name of the elder statesman Chief Dapo Sarumi.” He noted.

“Owokoniran, is a consistent traitor with zero integrity and I call on the South West leadership to advice Owokoniran to resign as zonal secretary”, the Pacesetter boss continued.

The Oyo PDP cheiftain commended the  elders of the party for their bravery:

“I must use this opportunity to commend our indefatigable leader, Chief Bode George and the Lagos leadership for their strong voices and bravery on championing the voice of the people on this very important issue.”