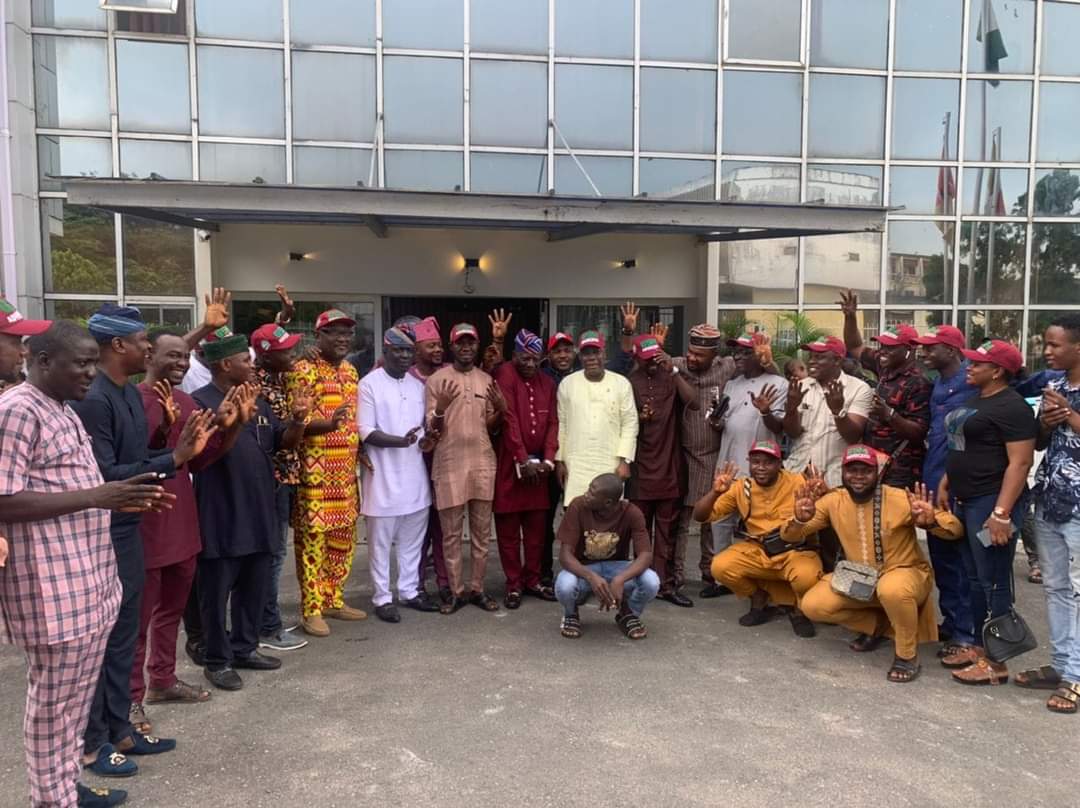 The Oyo state Acting Governor, Barrister Bayo Abdulroheem Lawal yesterday hosted the Publicity Secretary of the ruling People’s Democratic Party (PDP) and members of a sociopolitical group within the party under the aegis of the ‘GSM Advocates’.

MOUTHPIECE NGR understands that GSM Advocate is a group of die-hard supporters of Governor Seyi Makinde and also a sociopolitical group of professionals, experts, students, youth organizations championing the course of good governance across the state and the entire south western region.

The group led by Akeem Olatunji was hosted by the Acting Governor yesterday August 22 at his Agodi Secretariat office in Ibadan.

GSM Advocate is a group of die-hard supporters of Governor Seyi Makinde, also a sociopolitical group of professionals, experts, students, youth organizations championing the course of good governance across the state and the entire south western region.

The Acting Governor, Barrister Lawal in his brief remarks appreciated and commended Olatunji and the group for what he described as an excellent job stressing that the campaign for good governance being championed by the GSM Advocates was unprecedented and has created a far reaching positive effect for both the party and government.

The Acting Governor, while describing his relationship with Olatunji as a robust, cordial elder brother-younger brother relationship said they have both come a long way together for over a decade with tremendous admiration and respect for one another.

In his words, “when I was informed that the GSM Advocates would like to pay a courtesy visit to me, I was first of all entrilled and delighted to have you. And i believe that would afford an opportunity for me to say one or two things by way of observation.

“But let me specially appreciate all of you together this morning. You’ve been doing a wonderful job GSM and indeed for this administration. Each time I look through platforms, I normally see hands of GSM Advocates. It’s a nice one.”

Speaking on his emergence as the Acting Governor of the state Barrister Lawal said, “it has never happened before to have an Acting Governor. I think about two weeks ago, the governor and I were just discussing I a very relaxed mood and we flipped back in history whether in fact there had been any individual who acted in the western regional government or larger western state government, or larger Oyo state government.

“Indeed, in this present Oyo state government as it is constituted, none has produced an Acting Governor. So, in your reportage I will like you to help me appreciate His Excellency, for affording me this opportunity. It is a rare one and you know what, it’s borne out of absolute trust to invest one’s authority and powers on another person.

“And when this thing was coming he said to somebody I don’t want to quote any name, that I have transferred power to my deputy so, that individual took a second look at him and he was kind of surprise that are you sure of what you are doing. He said yes! without any reservation he said I’m going on vacation let him act.

“The import of that action is not lost on me and I take it as a take home, and when I say take home it means I take it till the end of my life.”

Earlier, Olatunji who led the delegation of the sociopolitical group in his brief address commended the Acting Governor for bringing stability and balance to the Seyi Makinde led government with his full commitment, dedication, and absolute loyalty to the Governor.

Olatunji said GSM Advocates spreads across the entire 33 local government areas of the state with strong determination to ensure the good governance, qualitative leadership, and dividends of democracy being enjoyed under Governor Makinde continues beyond 2023 uninterruptedly.

Some of the leaders of the group which include Bashorun Abiodun Saint-Abbey who is a lecturer at one of the state’s tertiary institutions and Comrade Simeon Ibekwe, a senior federal Civil Servant in their separate remarks appreciated the Acting Governor for the warm reception stressing that the group has no atom of doubt in the combination of Makinde and Lawal till 2027 describing the duo as the ‘2023 Joker’ that’ll shock others in the guber race.

Others members of the group who were part of the delegation to the Acting Governor include the state Youth Leader of PDP, Michael Ogunsina and members of the GSM Advocates who are now political appointees to Governor Makinde.