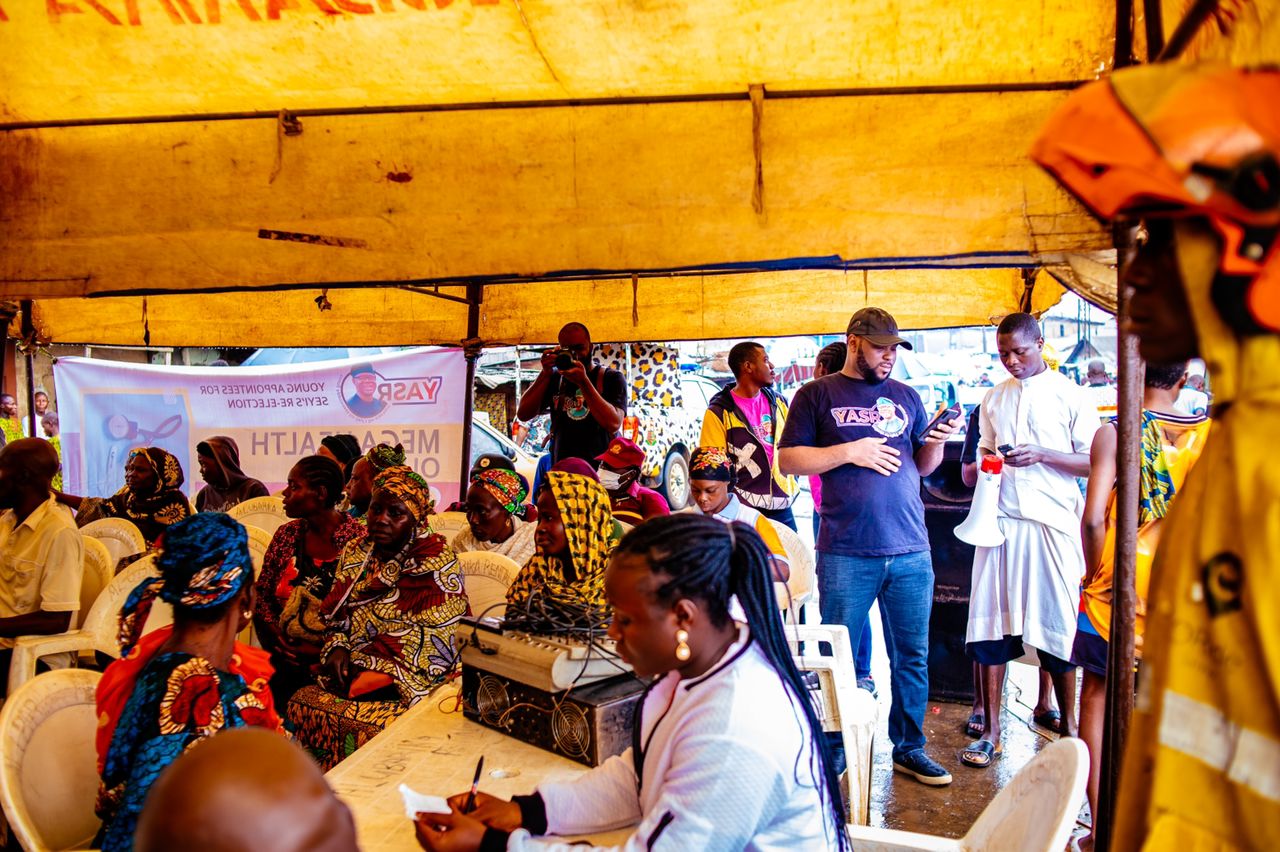 In a bid to further complement the efforts of Governor Seyi Makinde in health sector, a support group, Young Appointees for Seyi’s Reelection, YASR, has embarked on a free medical outreach designed to improve the health of the people of the Ibadan North East local government.

The event, which held at Oje Market on Saturday, had close to five hundred residents, who trooped out to benefit from the life-touching programme.

According to the Coordinator of the Team, who is also the Personal Assistant to Governor Seyi Makinde’s Chief of staff, Otunba Segun Ogunwuyi, the outreach was one of the identified strategies to take dividends of democracy to the people of the grassroots.

He said: “Our Team, YASR, has strategically identified best strategies to complement the good efforts of Governor Seyi Makinde in the grassroots, and this is just a tip of the iceberg.

“Majorly, our mission is to activate continuation of good governance in the nooks and crannies of the state. We have itemized our monthly and quarterly work plan in line with lay down policies of our principal. So, I can assure that we shall continue to do this to extend government to the people of the grassroots.”

While also speaking at the event, the Special Assistant to the State Governor on Youth and Sports, Honourable Kazeem Bolarinwa, explained that the outreach was necessary and timely, adding that exercise will be extended to other local government areas and zones in the State.

Bolarinwa, while saying that the massive turnout was encouraging, noted that the extention of the exercise would have a great deal of impact in the lives of people in the grassroots and equally encourage them to vote for the governor in 2023.

Bolarinwa said: “First of all, I am encouraged by this massive turnout today. We have organised this because we want to get across to the people of the grassroots in Oyo State. As young appointees of the current government, who are familiar with the realities going on in the grassroots, we realised that the people of this constituency really need this intervention.

“Of course, this is a complementary effort to what the governor is doing at the state level and we are not stopping here. Part of our plans is to touch other local government areas and zones in the state and we shall achieve it to support the reelection bid of our principal.”

Earlier, during the health talk session, a nutritionist, Oluwaferanmi Oyewale, who advised the beneficiaries, noted that balanced diet containing the six classes of food should be considered in selection of food.

“There is need for us to take care of our health when it comes to the food and other things we take. Let us ensure that we eat foods that won’t affect our health. Let us also make sure that we don’t take too much of alcoholic content because it can cause kidney and liver diseases,” She said.

The nutritionist, however, warned beneficiaries to stay away from taking cigarette and too much salt which, according to her, have adverse effect on kidney, adding that they should embrace the habit of taking at least 3.7litres of water on a daily basis.

Some of the beneficiaries, who spoke during the event, appreciated YASR for the free treatment they were opportuned to receive as well as the discoveries about their overall health.

The beneficiaries were, however, given free drugs after they had been diagnosed and over 500 malaria nets were given.