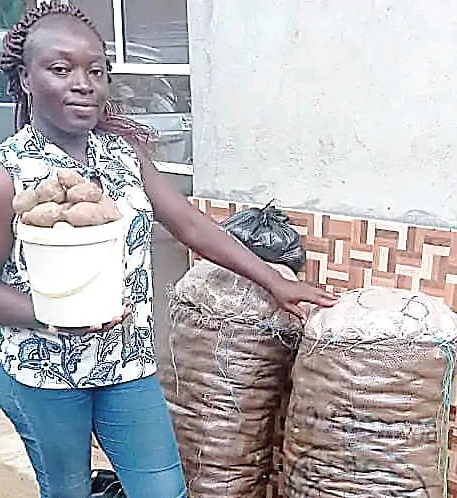 Christiana Pam, a lecturer at the University of Uyo, Akwa Ibom State, says to survive the ongoing strike of the Academic Staff Union of Universities (ASUU), she is now into the petty trade of selling potatoes.

On February 14, ASUU embarked on a four-week warning strike. The union extended the industrial action by another two months on March 14, to allow the government to meet all of its demands. A 12-week extension was announced on May 9.

Last week, ASUU extended the strike by a month, vowing to persist until its demands are met.

In an interview with newsmen, Pam, whose picture went viral on social media over her trade, said she got drained financially in the early days of the strike.

She said some of her colleagues were envious as they had nothing to fall back on for survival during the strike.

“When the first strike was declared, I had the assumption that within four weeks, it would be called off and we would resume. I was very hopeful and relaxed, waiting for it to be called off but after ASUU’s negotiations with the Federal Government, which didn’t end well as the demands of ASUU were obviously not met, the strike was extended. That was when it dawned on me that I needed to take a step because, within the first phase of the strike, I was already drained financially as I am new to the system and had yet to have the opportunity to save more money before the strike. So I thought of going home to Plateau State. I was so financially down that I had to borrow some money to take myself to my parents.”

“My parents had always been farmers even before their retirement, so after their retirement, they continued farming. When I got back home, I joined them on the farm with the hope that after two weeks, the strike would be called off and I would be back to work but in what looked like a joke, I started with them by clearing the farm, planting and it got to harvesting time and I was still at home. So, I began to wonder what I could do to earn an income as I could not ask my retired parents for money because they should be the ones looking up to me. So, I decided to sell some of the potatoes we harvested from our farm and they would be appreciated in Akwa Ibom.

“I had to sell some of them in Jos to raise money to move the remaining ones to Akwa Ibom State and just try my hands and see how it would go. That was where I was spotted. I believe that you start with what you have. It is what you have that you can use to your advantage. I looked around and I asked myself what I had that I could use to sustain myself at this critical time and I discovered that what I had were potatoes.

Reacting to the public perception over the move, Pam said it was as a result of the condition she found herself.

“I kept telling them shamelessly that I was on a farm with my parents, so when I started selling potatoes as a lecturer, I didn’t really feel anything. I just felt it was a condition I had found myself in. My colleagues said they envied me because I had something to sell when they did not. So, for me, I am okay with having something to do. My students even patronise me. They felt encouraged that I stooped to such a level as a lecturer when some of them were busy feeling pompous at home.”

When asked how lucrative the business is, Christiana said she gain about N3,00 from each bag of potatoes she sold.

While hoping that the ongoing strike yield a positive result, she also call on her fellow colleagues to be creative and find alternative means to survive.