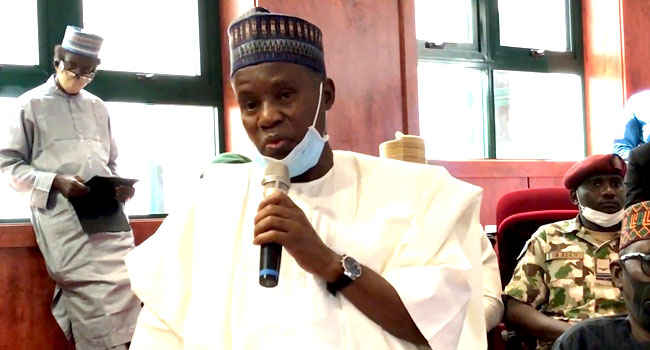 The Minister of Defence, Bashir Magashi, on Wednesday, reacted to the Kuje prison attack, saying all the 64 members of the Boko Haram terrorists fled the facility.

Gunmen had stormed the facility on Tuesday, with explosions and gunshots heard from the direction of the correctional centre located in Abuja, the nation’s capital.

Addressing reporters a day after the attack, Magashi said there are strong indications that terrorists invaded the facility to free their members being held in detention.

He explained that the Federal Government is working hard to ensure that other fleeing inmates were being recaptured and kept back in the facility.

“Most likely, they are Boko Haram because we have a sizeable number of Boko Harams that are in detention,” the minister said.

“Presently, we could not locate any of them. I think there are about 64 Boko Haram (members) in prison, they have all escaped.

”Noting that the situation is under control, he said the correctional centre could accommodate 994 prison inmates.

Of the figure, the Defence Minister said the government has been able to track down 600 inmates who have been recaptured.

He stated further that before the end of the day, many more inmates still hiding would be rearrested and sent back to the facility.

Magashi added, “We are trying to see what we can do to ensure that all the escapees are brought back to the prison yard. I think the prison is an accommodation for about 994 inmate escapees.

“We have 600 already inside now and many people are being captured and brought back to the prison. Maybe by the close of the day, more would have been captured. I think everything is under control.”

The Permanent Secretary of the Ministry of Interior, Mr Shuaibu Belgore, had earlier explained that over 300 of the inmates have been retrieved and more are on the way.

He also said that it is unclear how many of the gunmen were killed, adding that the government lost one official with three others injured.