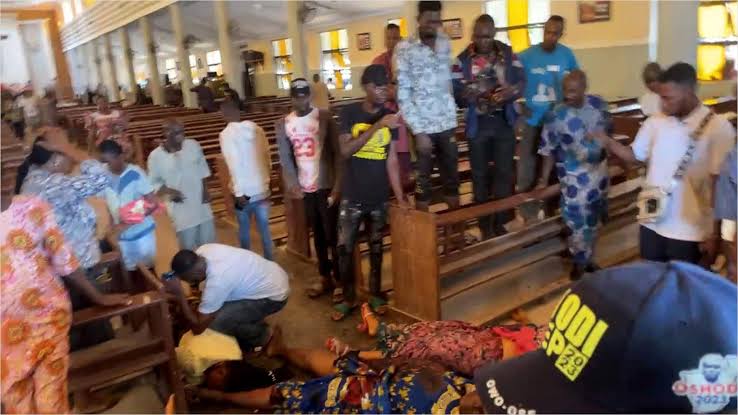 The National leader and frontline presidential aspirant on the platform of All Progressives Congress (APC), Bola Tinubu, has been reported to have left the Federal Capital Territory (FCT) Abuja for Owo in Ondo State, to commiserate with victims of the St Francis Catholic Church attacks.

Tinubu was said to have left delegates, chieftains and other members of the APC that had arrived the country’s seat of power for the party’s presidential primary, for Ondo State where he would be meeting with the State Governor, Rotimi Akeredolu, traditional rulers particularly the Olowo of Owo Kingdom, Oba Ajibade Gbadegesin Ogunoye, and others, to sympathise with them over the development.

Aside from that, the APC national leader, as learnt, would also on Monday be meeting with some of the worshippers that survived the attacks and relatives of the St Francis Catholic Church attack victims.

It was learnt that he told his aides, while leaving, that it was proper for him to visit the state see the both survivors and deceased relatives since their departed relatives were among those that he would have govern when elected as president.

Mouthpiece NGR gathered that he donated N50m to Owo shooting victims and additional N25m to the Catholic Church.

Earlier, the Lagos State former governor had condemned the attacks that halted activities across the state and described perpetrators as evil doers.

In a short statement released through his official social media handle minutes after the tragedy occurred, the presidential aspirant prayed for quick recovery for the injured survivors.

According to him, I strongly condemn the evil and brutal attack that took place at the St Francis Catholic Church, Owo, Ondo State, this morning. I pray healing and comfort for the injured and the bereaved.

“May Almighty God grant eternal rest to the departed as He gives peace to those they leave behind. My thoughts and prayers are with H.E. Governor Akeredolu, the government and the people of Ondo State”.

Meanwhile, before the visit, the state governor has declared a seven-day mourning and directed that all flags should fly at half-mast.