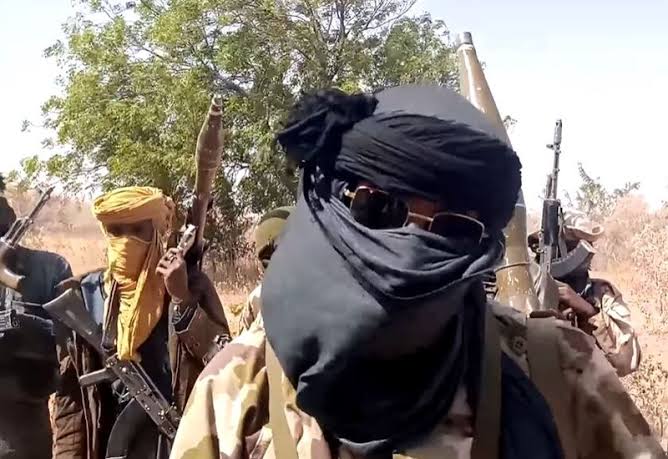 Our correspondent who visited the scene learnt from sources that the incident took place about 10 am, forcing shop owners to abruptly close their shops.

Some of the eyewitnesses said that one of the deceased person’s popularly known as Sammy and another victim identified as Alaba were killed by gunmen who came on two commercial tricycle.

It was learnt that while Sammy sells footwear, Alaba sells   electronic gadgets.One of the eyewitnesses, who spoke anonymously, said that the killers came with two commercial tricycles.

“We were here discussing about the victory of the Super Eagles when some gunmen in two tricycles disembarked and went straight to Alaba who was with Sammy in Alaba’s shop after Sammy parked his car nearby.

“Before you knew what was happening, they had shot at Alaba. The sound of their gunshot sent us scampering in different directions.

“I ran for safety. I saw them shooting Sammy and later used what appeared to be an axe on him. It was at that point that Samm, dropped dead.

“Sammy’s shop is the green and white shop after the Waterside Bridge while Alaba’s is the one with green colour along Omoba under the bridge.

“It was disturbing that this thing happened just a few metres away from the Eziama Police Station without any presence of police.

“You can see that the whole area is deserted as nobody is around due to fear.”

Police spokesman Geoffrey Ogbonna did not take his calls and did not confirm the incident.

But a police source, speaking anonymously, affirmed that the attack happened.

According to the source, the police has commenced investigation into the matter, adding that the killing of the two friends was cult-related.

One person was killed and another left with gunshot wounds in the Tafoki area of Faskari council of Katsina State, while six persons were abducted in Shola community in Katsina council of the state.

Sources from Tafoki said the bandits in their numbers attacked Unguwar Sarkin Fulani, a neighbouring community, with the intention of rustling cattle belonging to resident herders but when they did not meet their target they conducted house to house search, killing one person.

A resident of the community said, “Unguwar Sarkin Fulani is a polling unit under Tafoki ward and when the attackers learned that their targets had migrated to another location, they said they would not suffer for nothing, hence they started house to house search and carted away several cows and farming implements.

“Abdullahi was shot in the chest when they saw him coming out of his room and he died on the spot while one other person was shot in the thigh but he has been taken to the hospital for treatment.”Bandits also attacked Shola community, abducting six persons.

Locals said the terrorists also moved from house to house, where they abducted four men, one married woman, and her two-year-old baby girl.

Confirming the Shola incident, police spokesman Gambo Isah said the terrorists who were 12 in number on motorbikes and armed with AK47, invaded Shola Quarters and abducted six members of the community to an unknown destination.

Isah said, “The police command has deployed an anti-kidnapping unit in addition to other operational assets of the command to the area. He gave them the marching orders and restated that the command will not rest until the victims are rescued alive and unhurt.”