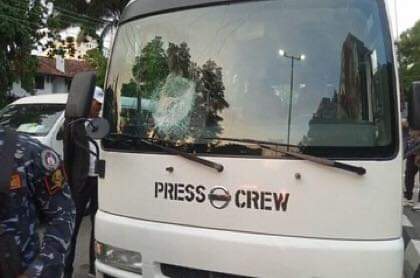 Some unidentified hoodlums have attacked the convoy of the APC’s presidential candidate, Bola Tinubu in Lagos State.

Tinubu, according to a report released by AIT, was attacked at the Adeniji end of Isale Eko after the former Lagos governor paid a visit to the Oba of Lagos.

Tinubu was heading to his Bourdillon Avenue, Ikoyi residence from the palace.

According to the report, the hoodlums who were wielding swords and cutlasses, threw stones at the convoy as it drove from the palace. They also smashed side glasses and front windshields of vehicles in the convoy.

Though Tinubu was not affected by the attack, the bus conveying journalists and the backup security car on the convoy were the most affected.

Two journalists who sustained injuries have been attended to medically.