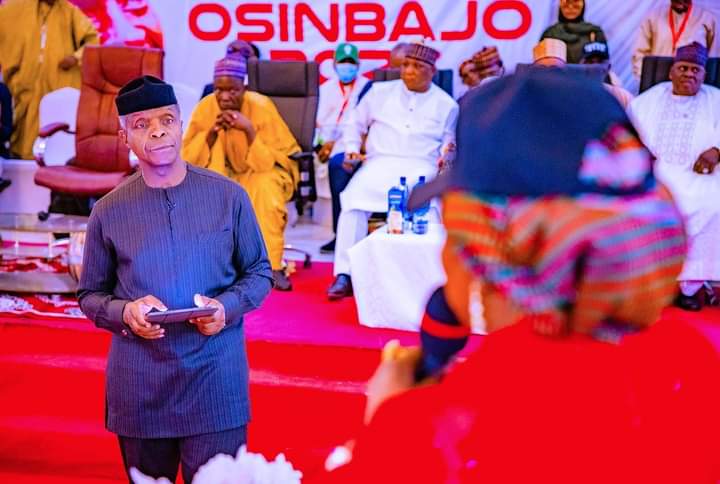 Ahead of the presidential primary election of the All Progressives Congress, APC, a group has set up a grassroots-based crowdfunding portal in aid of Vice President Yemi Osinbajo’s bid to become the party’s flag bearer.

The portal, Pyoglobalpartners.com, was launched by the group, which goes by the name PYO Global Partners.

In a statement signed on their behalf by Mrs. Temi Okesanjo, the unprecedented move in campaign financing in Nigeria was to ensure the emergence of a president who would not perceive himself as a lord or ruler in office.

According to the statement, the PYO Global Partners is organising “a mass fund-raising exercise for the PYO campaign, one in which every Nigerian will be presented with an opportunity to play a substantive role in determining who becomes the next President of Nigeria, not simply by voting on election day by which time voters are restricted to limited choices, but by being involved from the very beginning of the process. It’s about an opportunity to realise a true leadership transformation.”

The statement explained that the group was of the belief “that government belongs to the people and not to the individuals who have found their ways to elected or appointive positions.

“Over the years, Nigerians have come to perceive elected and appointed officials in high positions and offices as lords and rulers.

”We are committed to changing the paradigm and the presidential aspiration of a genuine servant-leader like Prof. Osinbajo, SAN, creates the opportunity.”

This came as the vice president has concluded his interactive sessions with stakeholders and delegates of the ruling APC in all the 36 states and the FCT, Abuja.

Osinbajo, whose last visits were to Benue and Lagos states on Wednesday, had declared his intention to contest the 2023 presidential election on the platform of the APC on Monday, April 11, in a televised and online broadcast which went viral on traditional, digital and social media platforms, with scores of millions at home and abroad welcoming him presidential declaration.

“I believe that the very reason why the Almighty God gave me these experiences, these insights, and these opportunities, is that they must be put to the use of our country and its great people,” Osinbajo had stated in his declaration speech.

A statementby the Senior Special Assistant to the President on Media and Publicity, Office of the Vice President, Laolu Akande, yesterday noted that the Vice President then began the interactive sessions with the delegates in Ibadan, Oyo State, on Friday, April 22.

It disclosed that at every of those interactions with stakeholders and delegates from the 36 States and the FCT, Prof. Osinbajo had robust question-and-answer sessions while also discussing and exchanging ideas.