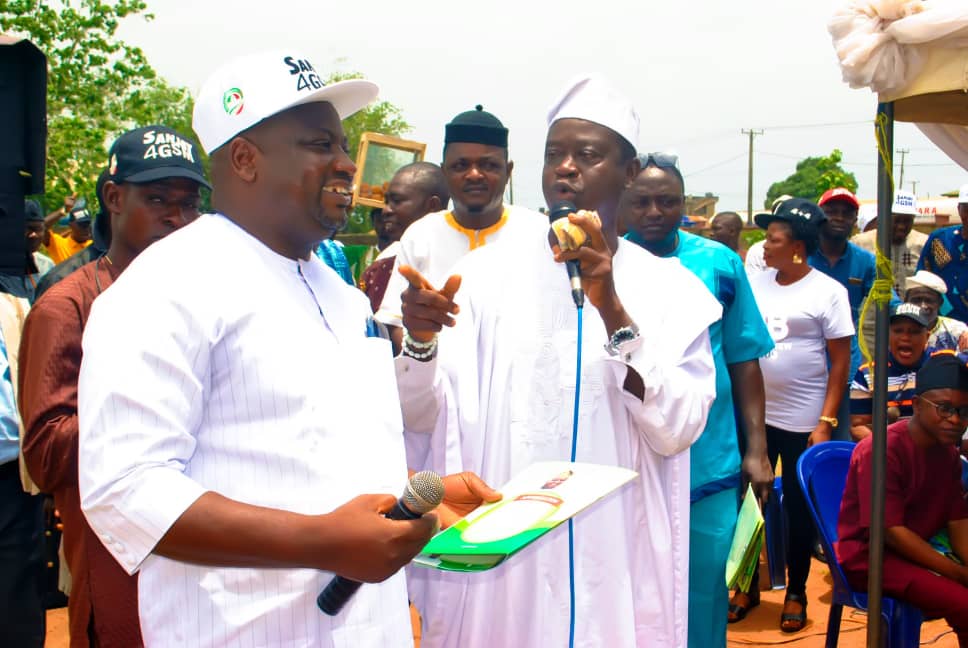 The lawmaker, representing Ogbomoso South Constituency at the Oyo State House of Assembly, Hon. Sanjo Adedoyin SANJAY has assured the people of his constituency of doing anything humanly possible to reduce the scourge of unemployable youths and graduates in the land to the barest minimum.

He made the vow on Sunday while speaking with Mouthpiece NGR correspondent on the recent empowerment of over 300 constituents held at Ogbomoso high school on Thursday.

Our correspondent covered that about 34 Generator, 34 Grounding machines, 26 Gas cylinder, 10 freezers, 36 sprayers, 10 dryers, 15 tailoring machines were distributed including cash to widows at the program.

Sanjo who noted that empowerment is a continuous thing,” further informed that names of successful candidates in the non-teaching staff recruitment in public secondary schools would soon be released.

The empowerment, according to him, is to attract more opportunities aimed at improving the personal and general socio-economic situation of the people.

He enthusiastically reeled out numerous achievements since assumption of office which include the facilitation of youths’ engagement under the Federal Ministry of Water Resources via RUWATSAN in which 40 persons benefitted and empowered to the tune of N60,000 (sixty thousand naira) each.

Equally Job employment for 30 persons in the Teaching Service Commission (TESCOM) and employment of 7 persons by the Oyo State Hospital Management Board including nurses, ward orderlies and pharmacists.

In addition, facilitation of job employment for 10 indigenes at the Ministry of Education as Education officers likewise 8 people into the Amotekun Corps.

The House majority leader is also known to have assisted about 10 students of higher institutions channeled through the Federation of Ogbomoso Students Union (FOGSU), under his Education Support programme while also distributed free UTME forms to indigent students through FOGSU.

Hon Adedoyin’s stewardship also included community development services among which are reconstruction of collapsed fence at Baptist Secondary Grammar School Ahoyaya; distribution of relief/ food items/sanitizers/soaps as well as floating of intensive sensitization programmes during the COVID-19 pandemic in 2020; facilitation of contract employment for 25 persons at LAUTECH Teaching Hospital; and assistance to retirees towards processing of their entitlements as well as to other people who approached him from time to time.

He was also particular about water provision in the constituency, and to ameliorate the predicament of his people, he provided motorized boreholes complete with generating sets in not less than five locations i.e. Alapata, Osuru, Idi-Oro, Owolaake and Ode Onisemo; and repaired boreholes in four areas (Federal Low Cost Estate, Ojude Ajaawa, Idi-Isin and Idi-Igba) and donated 5KVA generating sets to power them.

A facts-Check by Mouthpiece NGR indicated that Hon. Sanjo Adedoyin has moved about sixteen motions in the floor of the house most of which border in the overall well being of Ogbomoso South, Ogbomosoland, Oyo State as a whole and Nigeria in general.

He also Sponsored and Co_sponsored of many bills that bring overall progress and accelerated development to the state and the nation at large.

Sanjay has also assisted over hundred of teachers to get car loan, among others.