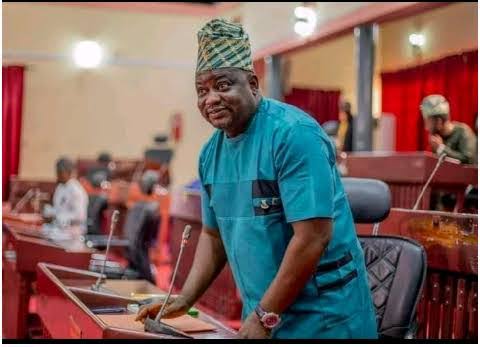 A Fact-check by Mouthpiece on Friday indicated that the quick intervention of Oyo majority leader, Hon. Sanjo Adedoyin on old Ogbomoso-Oyo road caught the attention of federal government on its rehabilitation last year.

The road which had been a death trap over the years had claimed many innocent lives and became a discomfort in which travelers are inflicted with harrowing experience.

Despite several protest from traders and religious bodies in Takie area to incite the Federal Government into action, none ever stirred the government.

A source privy to information disclosed that Hon Adedoyin, who is representing Ogbomoso South State Constituency, was the one that led a debate in the House of Assembly in respect of the road, which birthed an appeal to the Federal Government through the Ministry of Works and Housing and the Federal Road Maintenance Agency (FERMA), to “put urgent steps into motion towards speedy rehabilitation of old Oyo/Ogbomoso road and put measures in places towards completion of the remaining part of dual carriage way between Oyo and Ogbomoso.

“This was initiated through a motion sponsored on the floor of the House which led to invitation to the House of Director of highway and southwest representative of FERMA.”

“This led to the authorities awarding contract for the fixing of the road from Ogbomoso to Oyo, which has now made traveling through it less cumbersome and greatly improved its condition.”

While speaking on the revelation, Hon. Sanjo Adedoyin noted that his commitment is to represent the people well and to the best of his abilities.

“I was voted in to make a difference and this I will continue to strive to make. The task before me is enormous, the challenge is daunting all in the face of meagre resources but we will not relent.”