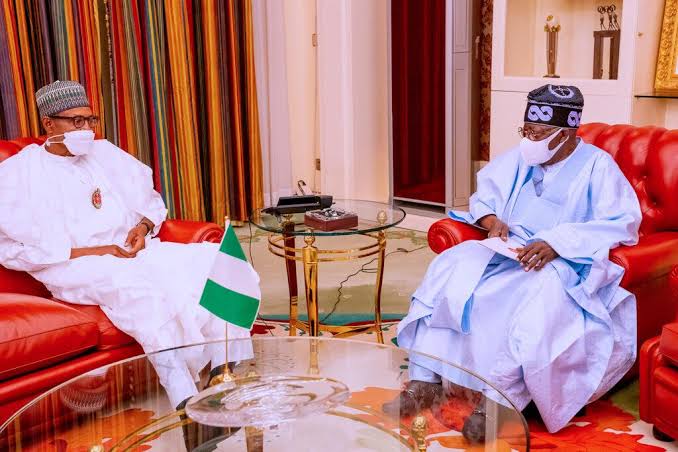 The National leader of the All Progressives Congress (APC), Asiwaju Bola Tinubu, has dismissed the calls in some quarters that he should remain a king maker instead of nurturing Presidential ambition in 2023.

Tinubu stated this when he fielded questions from State House correspondents after a closed door meeting with President Muhammadu Buhari in the Presidential Villa Abuja on Monday.

According to the APC chieftain, he is a Nigerian and he has the right to be the king himself, not just a king maker.

He said: “I have never seen where it is written in the rule book anywhere in any country that a king maker cannot be a king unless he commits murder. I want to pursue my ambition without the title of a king maker.”

The APC stalwart said he was in the presidential villa to formally inform the President of his desire to run for President in 2023.

”I can say categorically yes! I have informed the President of my intention but I have not informed Nigerians yet.

“You will soon hear what you want to hear all you want to hear, a categorical declaration; you’ve gotten that truth from me that I have informed the President of my ambition and you don’t expect more answers than that.”

When asked how the President responded to his declaration, Tinubu said the President did not ask him to discard his political ambition.

“He is a democrat. He didn’t ask me to stop, he didn’t ask me not to attempt and pursue my ambition. It is a lifelong ambition. You are running a democratic dispensation and you must adopt the principles and values and virtues of democracy,” he said.

On the purported ambition of Vice President Yemi Osinbajo, Gov. Yahaya Bello of Kogi and other politicians nurturing similar presidential ambitions with him in the APC, Tinubu said he would not discuss individuals.

“I don’t want to discuss individuals now, I must discuss myself. I have the confidence, vision and capacity to build on the foundation of the President and turn Nigeria better. I have done that with commitment and yielding zeal in Lagos State.

“You have seen that experience and capacity to turn things around and that is also what we are doing. The confusion and drift of the past in PDP is being corrected as we are today. Going back to the data of how many barrels of oil we were producing when we took over and what we have today.

“You now see excellent infrastructure. Let us think back and be intellectually inquisitive as to the past and the present as well as what the future holds for Nigeria,” he added.