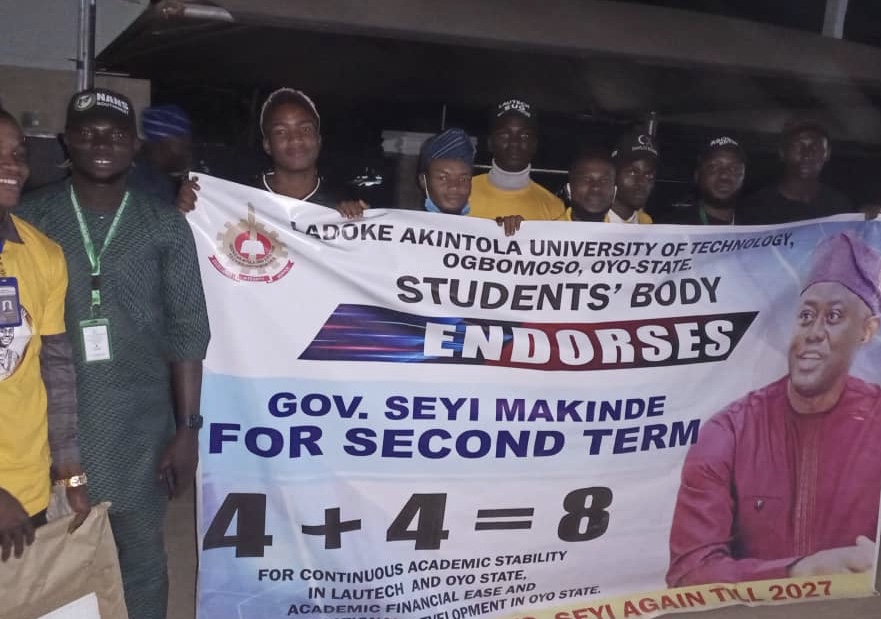 The Students Body of Ladoke Akintola University of Technology, LAUTECH, Ogbomoso headed by President Adeboye Anuoluwa have expressed their support and wish for the State governor to run for second term in office in order to do more for educational development and youth empowerment.

The students who paid a ‘thank-you’ visit to the Governor for the reduction of school fees by 25% and restoration of the school lost glory pledged their continued loyalty to the Makinde led administration.

Mouthpiece NGR understands that the students displayed various placards expressing their support for the ruling party and expressing gratitude to the governor for revamping education sector in the state and prompt payment of bursary which they noted would go a long way in helping them in their studies.

It was learnt that several Students’ bodies, including Former Students Union President of LAUTECH and SA to Governor Seyi Makinde Abiodun Oluwaseun LAUREL, indigenous organization and students association domiciled in LAUTECH, together with the Dean of Students’ Affairs, Prof. Azeem Ige were received by the Governor.

While enumerating various achievements of the governor in the education sector, the students hinged his performance on the laudable programmes of his administration which they noted were people-friendly and therefore declared their total support for his second term ambition.

Speaking with Mouthpiece NGR on Sunday, the Dean of Students Affairs, Professor Azeem Ige thanked the Governor for his modest achievement in the education sector and urged him to continue implementing the people-friendly programmes of his administration.

The SUG President, in his submission, noted that they decided to support re-election of Governor Seyi Makinde in order to sustain the tempo of steady progress and development in the state.